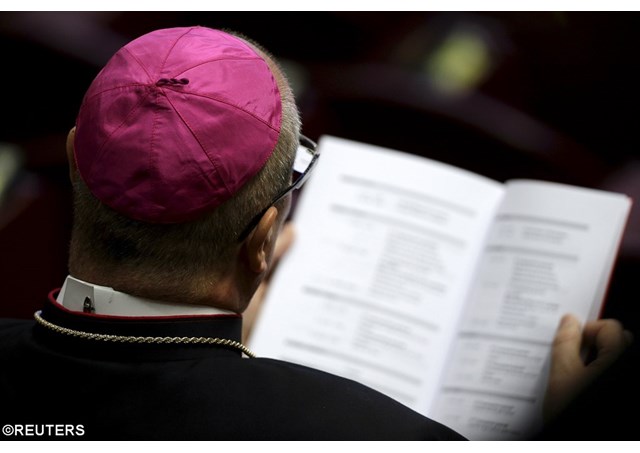 He was joined at the briefing by three Synod Assembly delegates: Abbot Jeremias Schröder, General of the Benedictines of St. Ottilien, Mrs Moira McQueen, head of the Canadian Institute for Bioethics and Mrs Thérèse Nyirabukeye of the African Federation of Family Action.

Cardinal George Pell said that a letter sent to the Holy Father was confidential and what had been widely published “does not reflect the text or the signatories”. This was in response to a letter which was addressed to the Pope by thirteen Cardinals who were allegedly unhappy with the way the Synod process was being managed.

Fr. Lombardi went on to say that Cardinal Pell said that whoever handed this letter and the names of signatories to the media had disrupted the process of the Synod which was being conducted in a “good climate”.

Lombardi also read a statement written by Cardinal Wilfrid Napier, one of the president delegates of the Synod. The South African Cardinal stated that what media claimed he said "did not reflect his thought at all.” Napier had been quoted as saying he would challenge the right of the Holy Father to choose the drafting committee of the final report. He said that the Pope did have the right to choose the drafting committee. Lombardi added that the statement was written in Napier’s own hand.

The three guests at the briefing spoke of the importance of good families to foster future vocations. “The quality of the individual is forged in the family,” Nyirabukeye said.

On the question of the ordination of women to the deaconate, Abbot Schröder said that it was a single proposal by an isolated voice that did not seem to be important in the room.

Mrs. McQueen was asked for her thoughts on the fertilisation and manipulation of embryos. She replied that the assembly was dealing in “broad generalities” when it came to bioethical issues because, inside the Synod, there was "already a clear understanding of the Church’s position."

Nyirabukeye spoke at length about her experience of teaching couples natural family planning in Africa. She said that she has been involved in this ministry since 1985. She told the briefing that 1500 couples had recently registered to learn about natural family planning methods in Rwanda. She said that she thought that engaging in natural methods gave women an understanding of their bodies and gave them pride. “I am very happy to tell the Fathers of the Synod that these work,” she said.

All three of the guests spoke about the question of diversity and unity and how this might be managed. There have been numerous suggestions that issues be decentralised and dealt with by local Episcopal Conferences. Mention was made of the question of cohabitation (in Germany specifically) and local pastoral responses to homosexuality. Abbot Schröder explained that many interventions had supported this, few had cautioned against it.

Mrs McQueen told the media that she could see many advantages and a number of disadvantages to such an approach. It would be positive to put this into practice but some doctrinal aspects would have to be reserved to the Holy See. She said that she thought this was about Church structure and therefore could not be dealt with at this assembly.

The guests spoke about the participation of women at the Synod. Both women present said that they were delighted to be at the Synod and felt that their contributions were being listened to and taken seriously. They felt “at ease” and “happy” to make contributions.

Abbot Schröder remarked that he wished there were more women religious present. He explained that at a meeting of male Superior Generals' there was a suggestion that they should give half of their ten allocated seats to women religious. Meanwhile, women religious had approached the secretary-general of the Synod and thereafter had been allocated three seats.

McQueen said that she thought the Synodal process was fair and very democratic. All the delegates were allowed the same time to make interventions – three minutes each.

Lombardi told the media that the session on Friday afternoon will be devoted to interventions from fraternal delegates, listeners and auditors.

On Wednesday the Synod delegates will return to a plenary session to listen to the reports from the small group work.