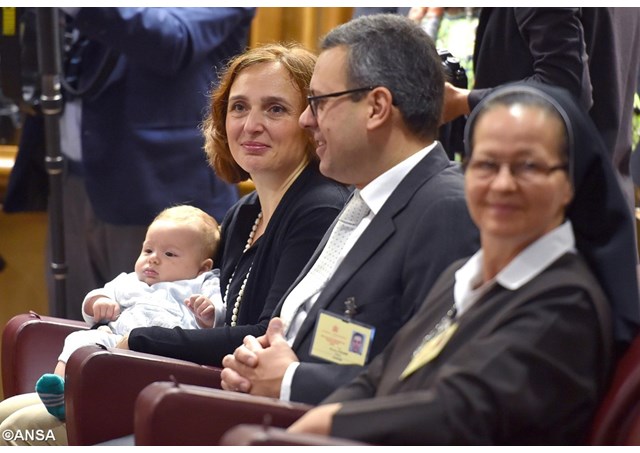 (Vatican Radio) Monday 12 Oct. Fr. Federico Lombardi SJ, spokesman for the Holy See, was accompanied by Fr. Thomas Rosica CSB and two couples - Pedro & Ketty De Rezende from Brazil and Ishwar & Penny Bajaj from India - at the daily press briefing for the Synod on the Family.

Click below to hear the report by Fr. Russell Pollitt SJ

It would be a welcome innovation if there was a proposal to the bishops of the world to ensure much more formation and accompaniment of couples was in place before, during and after marriage, said Mr & Mrs De Renzende, a couple attending the Synod on the Family as delegates from Brazil. The formation of couples for marriage and their accompaniment after marriage was spoken about extensively, Fr. Federico Lombardi told the daily press conference.

Fr. Lombardi said that the Synod delegates would be working in small groups on Monday and Tuesday discussing the second part of Instrumentum Laboris. The groups will report back on Wednesday morning to the plenary.

On Monday morning Cardinals Vingt-Tois and Scola said that they did not sign an alleged letter to the Pope expressing concern about the Synod. Fr. Lombardi said that he knew nothing of such a letter and - if there was one - it was not a public letter.

Lombardi also clarified issues around the process of the Synod. There will be a final report presented to the Holy Father but what he decides to do with the report has not yet been made clear. “He may release immediately or he may study it first before he releases it, we are waiting to understand that too,” he said.

Admission to the sacraments for the divorced and remarried as well as those married under civil law only was debated by the Synod participants. They did not speak solely about access to the Eucharist but all the sacraments. Some participants suggested that the Synod was an opportunity that should not be missed, an opportunity for the Church to be merciful. It was also reiterated that the Church needs to teach the truth about Christian marriage but lovingly accompany those who are hurting. There was an intervention which encouraged the Church to go back and look at the historical development of theology, doctrine and the sacraments so that there is a deeper consciousness of them, Fr. Lombardi explained.

Fr. Rosica told the media that one intervention stated that it was the “mission of the Church to make disciples but that culture was often more successful at unmaking them.” He said that one of the Fathers said that often ministers of the Church operate within two extremes: truth in public and mercy in private. It was acknowledged by the bishops that this was not helpful. The Parable of the Prodigal Son had been referred to many times in the interventions. Fr Rosica explained that families "in all their forms" had been acknowledeged to be "in the midst of the Church". He said that the delegates had agreed that pastoral strategies need to be developed taking into account the diverse situations which are reflected in family life today.

Mr. De Rezende told the briefing that he is surprised at what he reads in media reports about the Synod. "Many, many times it does not reflect what is said in there." He added that there were no discussions about changing doctrines but that "pastoral attitudes had to go through revisions".

Mrs. Bajaj said that she was deeply moved by the compassion and empathy of the Synod Fathers who understand the struggles of family life. She said that she saw their great love, concern and hope for families.

There was also an intervention on the formation of conscience in the context of Humane Vitae. There should be a concerted effort to form the consciences of God’s people.