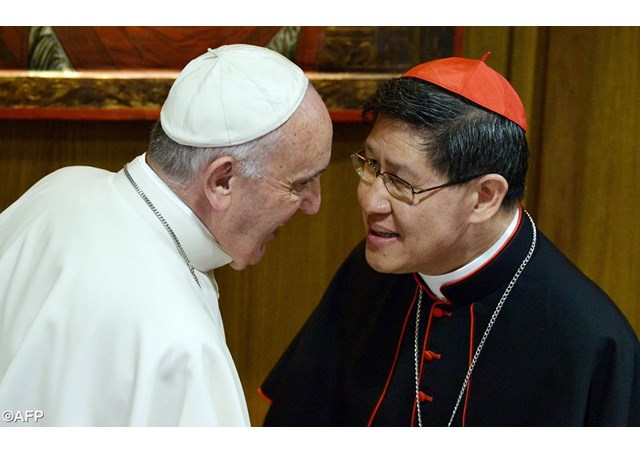 (Vatican Radio) Fr. Federico Lombardi, SJ, director of the Holy See Press Office, brought three prelates as guests on Friday to the daily media briefing on the progress of the Synod on the Family taking place at Vatican City. Cardinal Luis Antonio Tagle of Manila, Philippines and Archbishops Joseph E. of Kurtz of Louisville, Kentucky, and Carlos Osoro Sierra of Madrid, Spain were present.

Click below to hear the report by Fr. Russell Pollitt, SJ:

Cardinal Tagle told the Friday press briefing that he was impressed by what he heard in the small group work at the Synod on the Family. He said that there was a "freedom and openness" to the diverse contexts and situations that families find themselves in across the world. He said the sharp criticism by one of the small groups, which called the document "chaotic" and that the "Holy Father and people of God deserve something better," was to be expected since this was a working document.

Fr. Lombardi said that Pope Francis had made an important intervention before morning prayer asking for prayers especially for the Middle East. After morning prayer the bishops working groups reported on their discussions over the last two days on the first section of Instrumentum Laboris. Once the reports were completed the Fathers began to look at part two of the working document.

Archbishop Kurtz said that he found it very helpful to work in small groups early in the Synod. He said that this enabled delegates to engage early. Kurtz said many Fathers were concerned that the final document should reflect the concerns of the whole church and not be too "western". Kurtz said that migration had emerged as a strong theme and that the Fathers saw the need to call on governments to be welcoming and generous to migrants.

Archbishop Sierra said that the church needs to try and accompany families that immigrate more generously. Kurtz added that the Episcopal Conference of the United States is trying to engage the government and work towards more just laws on migration in America.

All three of the prelates affirmed the church’s teaching on the right to life and said that it was important the families who are struggling with unexpected pregnancies be accompanied pastorally.

Tagle said that this was a Synod in which the church was affirming its love and pastoral concern for families. He said that for some there was great expectation that there would be doctrinal pronouncements but that this was not what the Synod was about. He said it was about the support the church renders to the family. “We are affirming teaching not changing it, we are looking for liberating ways to give new life to families,” Tagle said. An important question, the Cardinal said, was “How do we help people live the doctrine?”

Questioned about the new synodal  process the Fathers are using, the prelates agreed that it was working. Cardinal Tagle humorously said that even if there was a little confusion it was “good to be confused from time to time!” He said that the new process was more effective because the bishops dealt with smaller pieces of the text at any given time. “We don't have to discuss whole document after listening to three hundred interventions first,” he said. The discussions, Kurtz agreed, were now easier because the focus was on smaller parts of the document.

The prelates told the media that, without turning a blind eye to the challenges, the Fathers wanted to celebrate the family and the many families who are living faithfully in difficult conditions.