Pope Francis: discern and watch, even in good times 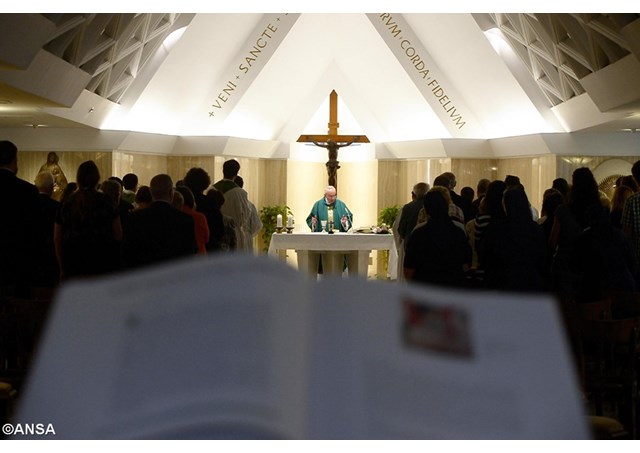 (Vatican Radio)  The Christian must discern all things, even when everything is going well.  That was at the heart of Pope Francis’ homily at Mass on Friday morning in the chapel of the Casa Santa Marta in the Vatican.

At his Friday morning Mass at the Casa Santa Marta, Pope Francis focused his remarks on the necessity of discernment of situations, whether it seems to come from God or from the evil one “who always seeks to deceive, to make us choose the wrong path”.

In Friday’s Gospel reading, Jesus drives out a demon, doing good to the man once afflicted, but some from the crowd of witnesses accuse him of being in league with Beelzebul.

“There was another group,” the Holy Father said, “that did not appreciate him and sought to interpret Jesus’ words and actions in a different way, against Jesus. Some, for envy, others for doctrinal rigidity, others because they were afraid that the Romans would come and massacre them; for many reasons they sought to distance Jesus’ authority from the people, even with slander as in this case.”

Against such misinterpretations of a situation, Pope Francis invited Christians to discern the roots of any given situation, because in the life of faith “temptations always return, the Evil Spirit never tires”.

“The Evil One is hidden,” the Pope said, “he comes with his very educated friends, knocks at the door, asks for permission, comes in, and lives with that person.  Drop by drop, he gives him instructions” on how to “do things with relativism”.

Pope Francis continued, saying “Anesthetize the conscience.  This is a great evil.  When the Evil Spirit succeeds in anesthetizing the conscience, it is then he can claim a true victory, for he has become the master of that conscience.”

What can one do against such attacks?  “Watchfulness,” the Holy Father said, “The Church counsels us to always make an examination of conscience:  what happened today in my heart because of this?”  “Discernement”, he concluded, “From where do these comments, words, teachings come? Who says this? Let us ask the Lord for this grace: the grace of discernment and of watchfulness.”