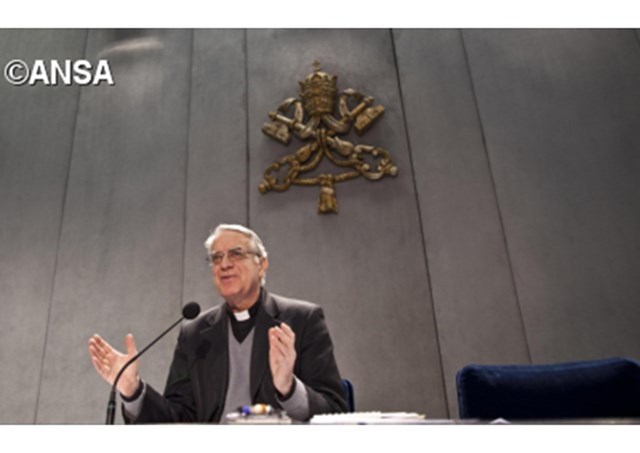 (Vatican Radio) On Thursday Oct. 8 at the daily press briefing for the Synod of the Family, three prelates spoke about issues from Africa and the Middle East. They said that the Synod is universal and that Africa and the West shared similar problems.

Archbishop Charles Palmer-Buckley of Accra, Ghana, said that the world needs to be patient with Africa when it comes to dealing with issues like homosexuality. “Give countries time to deal with issues from our own cultural perspectives,” he said. He added that the dignity and rights of all God’s son and daughters need to be upheld.

The Synod Fathers continued to work in groups on Thursday. Archbishop Edoardo Menchelli from Ancona-Osimo, Italy, told the briefing that there was an “open fraternal discussion” in his group and that there were divergent views emerging amongst the Fathers. The bishops, he said, were discussing the first part of Instrumentum Laboris on the current situation of the family from a wide perspective.

Patriarch Ignace Joseph Younan of Syria said that the Middle East was experiencing the opposite of the African Church where numbers are steadily growing. In the Middle East numbers are declining as young people and families want to “get out of hell” - they are being persecuted in tragic situations in places like Iraq and Syria. He said that the Church in the region felt helpless and deplores the fact that they cannot convince young people to stay in the places where Christianity was born.

Archbishop Palmer-Buckley said that African prelates are not blocking issues – like the admission of the divorced and remarried to communion, and a greater sensitivity towards homosexual people. He said that the African Church was at the Synod to talk about how it feels regarding these issues and the pastoral practice of the Church. “We are here to share our view, we endorse the teaching of the Church,” he said. “The African delegates respect what Cardinal Erdo did and presented to us,” Palmer-Buckle said, referring to Erdo’s Relatio at the opening session of the Synod.

Arcbishop Menchelli said that talking about the role of women in the Church and homosexuality was not out of context at the Synod. He said that if one examines the mission and vocation of the family you realise that a gay brother, for example, is part of the family and impacts on all in the family. He said that the pastoral role of women was equally important but that the ordination of women deacons raised sacramental and theological concerns that would need to be studied.

Fr. Lombardi, the director of the Holy See’s Press Office, informed the media that the final list of the Synod working groups had been published. He also told the media that the office had solved information technology problems and that all the contributions and interviews done at the Synod are now available on the website in various languages.

The Synod Fathers said that they did not feel the Synod was “Western” at the expense of Africa. The Synod, they agreed, was universal in its approach. Palmer-Buckle said that the concerns of the European Church are the concerns of Africa and vice versa. He added that often “everything that’s good in Africa is not good enough for European media but anything that is black is what’s good enough.”

Archbishop Menchelli pointed out that both the Western and African Church face similar issues. In Africa marriage is a long process and therefore takes time – often traditional marriages take place and only much later a church marriage. The Archbishop said that marriage is often also delayed - for different reasons - in the West. This is a mutual concern even though the causes may differ.

Fr. Lombardi said the Synod Fathers would return to a plenary session on Friday morning where the various working groups would report on their discussions.