Pope Francis: why do good things happen to bad people? 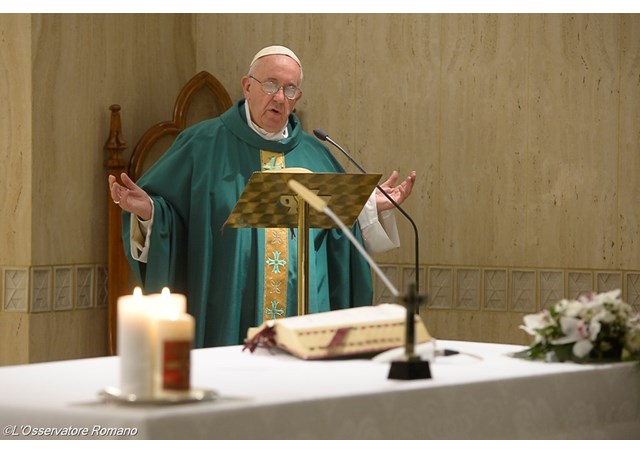 (Vatican Radio) God does not abandon the righteous, while those who sow evil are like strangers, whose names heaven remembers not. This is the lesson Pope Francis drew from the readings of the day at Mass Thursday morning in the chapel of the Casa Santa Marta in the Vatican.

A courageous young mother with a husband and three children – and a tumor – “one of the ugly ones” – that keeps her nailed to her bed. “Why?” An elderly woman, prayerfully pious in her heart, whose son was murdered by the Mafia.

Why do good things happen to bad people?

Pope Francis on Thursday used this perennial query of the heart that loves good and desires to know God’s plan, as the way into the mystery of iniquity and its relation to God’s providence, justice and mercy. Drawing on the reading from the prophet, Malachi, in which the Lord rebukes the people, saying, “You have defied me in word, says the LORD, yet you ask, ‘What have we spoken against you?’ You have said, ‘It is vain to serve God, and what do we profit by keeping his command, and going about in penitential dress in awe of the LORD of hosts? Rather must we call the proud blessed; for indeed evildoers prosper, and even tempt God with impunity,’” Pope Francis said:

“How many times do we see this reality in bad people, in people who do evil, and seem to do well in life: they are happy, they have everything they want, they want for nothing. Why Lord? This is one of the many questions we have. Why does this brazen evildoer who cares nothing for God nor for neighbor, who is an unjust person – even mean – and things go well in his whole life, he has everything he wants, while we, who want to do good, have so many problems?”

The Lord watches over the righteous

Pope Francis discovered the answer in the responsorial Psalm – Psalm 1 – which proclaims, “Blessed the man who follows not the counsel of the wicked Nor walks in the way of sinners, nor sits in the company of the insolent, But delights in the law of the LORD.” Pope Francis went on to say:

This ruin, this scattering and oblivion, which is the end of the wicked, is one Pope Francis found dramatically and emphatically stressed in the Gospel parable of Lazarus – the symbol of misery with no escape, to whom the rich reveler refused even the scraps from his table:

“It is curious: that [rich] man’s name is never spoken. He is just an adjective: he is a rich man (It. ricco, Gr. πλούσιος). Of the wicked, in God’s record book, there is no name: he is an evil one, a con man, a pimp ... They have no name. They only have adjectives. All those, who try to go on the way of the Lord, will rather be with His Son, who has the name: Jesus Saviour. It is a name that is difficult to understand, inexplicable for the trial of the Cross and for all that He suffered for us.”