Pope Francis: God wants his ministers to be merciful 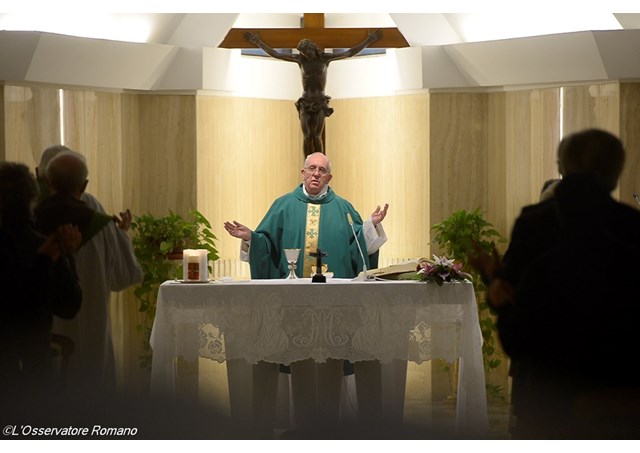 (Vatican Radio) Pope Francis has warned against having a hard heart that is closed to God’s mercy.

Speaking on Tuesday morning during Mass at the Casa Santa Marta before joining the Synod Fathers gathered in the Vatican Synod Hall, the Pope urged the faithful not to put one’s own convictions or a list of commandments before the Lord's mercy.

Drawing inspiration from the first reading of the Book of Jonah, the Pope pointed out that Jonah is initially resistant to God's will, but eventually learns that he must obey the Lord.

Remarking on the fact that the city of Nineveh converts thanks to Jonah’s preaching, Pope Francis said “it really was a miracle, because in this case he abandons his stubbornness, his rigidity,  to obey the will of God, and he did what the Lord commanded him."

And afterwards, the Pope said, after the conversion of Nineveh, Jonah “who was not a man who was docile to the Spirit of God, was angry". The Pope said he even rebuked the Lord.

So, Pope Francis observed, the story of Jonah and Nineveh unfolds in three chapters:  the first "is Jonah’s resistance to the mission the Lord entrusts him with"; the second "is his obedience” and the ensuing miracle; in the third chapter, "there is resistance to God’s mercy".

The Pope went on to say that Jesus too was misunderstood because of his mercy.

Pope Francis said that the Psalm that we prayed today tells us to "wait for the Lord because with the Lord there is mercy, and redemption."

"Where the Lord is - Francis concluded - there is mercy”. And, he added, as Ambrose said: “Where his ministers are there is rigidity. The rigidity that defies mission, which challenges mercy ":

"As we approach the Year of Mercy, let us pray the Lord to help us understand his heart, to understand what 'mercy' means, what it means when He says: 'I want mercy, not sacrifice!'” he said.