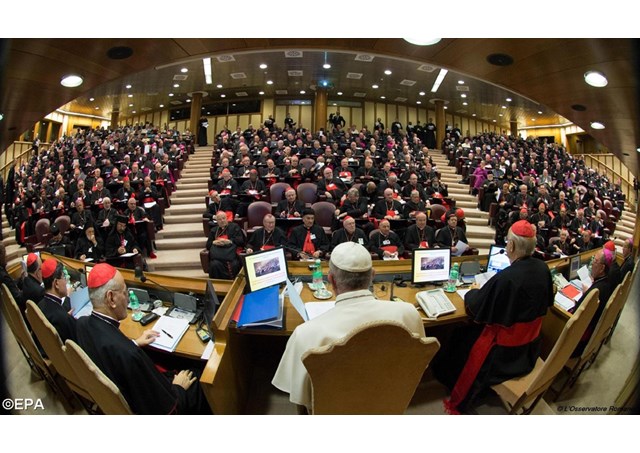 (Vatican Radio) The first of the daily press conferences to report on the proceedings of the Synod of the Family took place at 1pm Rome time on Monday. The Synod began on Sunday with a Mass celebrated by Pope Francis in St. Peter’s Basilica and the first session sat on Monday morning.

Fr. Federico Lombardi, S.J., director of the Holy See Press Office, was accompanied by Cardinal Péter Erdö from Hungary - who is the synod rapporteur; Cardinal André Vingt-Trois from France - one of the president delegates; and Italian Archbishop Bruno Forte - who is special secretary to the Synod. In his remarks Fr. Lombardi said that each day there would be Synod Fathers present at the press conference as guests.

Fr. Lombardi explained the order of the morning’s session which began with prayer and the singing of the Veni Creator Spiritus. Cardinal Lorenzo Baldisseri, general secretary of the synod, welcomed everyone before Pope Francis gave his opening address to the Synod Fathers. After the morning coffee break, Cardinal Péter Erdö gave the introductory address entitled “The Vocation of the Family in the Church and Contemporary World.”

Cardinal Vingt-Trois said that his first impression of the Synod was that there is “a wide diversity of participants, geographically, which includes members form the Latin and Oriental Churches but all are hinged around the Pope.” He said that the Holy Father had reiterated what he had said before; he wants to tackle issues in an “open-minded way through prayer, meditation and dialogue.”

Cardinal Erdö explained that his introductory address had followed the structure of Instrumentum Laboris. “I tried to systematise all the data which was received from the Church around the world, including families and individuals who wrote to us, following the themes already in Instrumentum Laboris.”

Archbishop Forte, in his remarks, said that the aim of the Synod was to “propose the gospel of the family” but also to “echo the hopes and pains of families around the world today.” He emphasised the need for “openness to the Holy Spirit as well as prayer and humility before God.”

The prelates answered some questions after their short inputs. They were asked if they feel under pressure form the media. Archbishop Forte responded saying that last year some media had a “bi-polar interpretation” of what was happening at the Synod but that this was “not the perception inside the Synod.” He said “We are here to listen to the problems people have, we are more united than the media assumes. There are divergent views, which are ok, but this does not mean division. I feel we are on a marvellous spiritual pathway with God.”

Cardinal Vingt-Trois explained how, in Paris, people were invited to create “synod teams.” He said that these teams found there were divergent opinions among them and they “could be expressed without breaking communion.”

The prelates emphasised that the Synod was a pastoral one. “It will not lead to doctrinal changes, because it is about pastoral attention, pastoral care. We are about resonating pastorally,” Forte said.

Cardinal Erdö said that there was an active interest in the Synod because of the issues that were raised last year. He said that the Synod Fathers hope to develop the Church’s understanding of family by listening to each other and paying special attention to tradition. “Development is not unlimited; we have to look at tradition.”