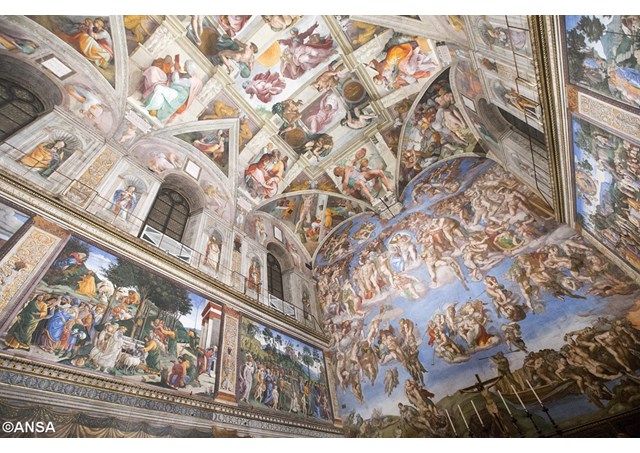 (VIS/Vatican Radio)  For the first time ever, the Vatican has opened the doors of the iconic Sistine Chapel for a studio recording with the Sistine Chapel Choir – the world’s oldest choir. The new album, “Cantate Domino. The Sistine Chapel and the music of Popes,” captures the sounds of the extraordinary acoustics of the Sistine Chapel, with music performed by the Pope’s own choir.  The album was released on Deutsche Grammophon on 25 September, and a presentation was given on Tuesday in the Holy See Press Office.

“The Pontifical Musical Choir, also known as the Sistine Chapel Choir, is among the oldest choral institutions in the world and has the unique characteristic of being the Pope's choir,” explained Archbishop Ganswein.

He said this characteristic makes it part of the life of the ‘Pope's Home’ and places the Pontifical Sistine Chapel Choir within the structure of the Prefecture of the Papal Household, and gives it the specific task of being an entity whose service is entirely devoted to the Pope.

“The Prefecture is the point of reference for the Choir in terms of its artistic, administrative and disciplinary management,” he continued. “The release of a musical CD under the prestigious Deutsche Grammaphon label is an unprecedented event in the history of the Pontifical Musical Choir, and attests to the quality and professionalism that this Institution has achieved, thanks to its serious and diligent work under the guidance of Maestro Massimo Palombella.”

The album, released on 25 September, includes Renaissance music written for the Sistine Chapel Choir by Palestrina, Lassus and Victoria. There are also two pieces of Gregorian chant, alongside world premiere recordings of the original version of Allegri’s fabled Miserere (Sistine Codex of 1661) and a Nunc dimittis attributed to Palestrina which is still used during papal celebrations. Cantate Domino offers listeners the chance to hear these pieces as the composers intended – in Latin and in the surroundings for which they were originally written. In order to capture the magic, mystery and beauty of the music in such unique surroundings, Deutsche Grammophon set up a specially constructed studio within the Chapel. The mixing desk was set up in an ante-chamber, next to the “Sala del Pianto” (where the newly elected pontiff first dresses in the papal vestments).

“The Sistine Chapel was consecrated in 1483, and since then it has been home, without interruption, of the Pontifical Musical Choir,” explained Msgr. Palombella. “In recent years, after intense and specific study of Renaissance religious music and its aesthetic importance, we have been able to undertake an interesting and significant recording. My hope is that these musical masterpieces will reach millions of people throughout the world, bringing them into contact with the historical culture and profound spirituality of the Catholic Church.”

The Sistine Chapel Choir is made up of 20 adult singers and 30 boy choristers. Among the singers is British baritone Mark Spyropoulos, who is the first British full-time member of the choir.

“This extraordinary choir, which has served successive popes since the early centuries of Christianity, has never before made a commercial recording in its home,” said Mark Wilkinson, President of Deutsche Grammophon. “This very special record has the power, the beauty, and the excellence to find a truly global audience ‒ and an audience beyond the traditional confines and boundaries of classical music.”

The release of Cantate Domino stands as a prelude to the Extraordinary Jubilee of Mercy, a Holy Year decreed by Pope Francis, which begins in December. During the last Holy Year in 2000, 25 million pilgrims visited Rome and the Vatican.

There is also a trailer and excerpt from Allegri: Miserere on Youtube.