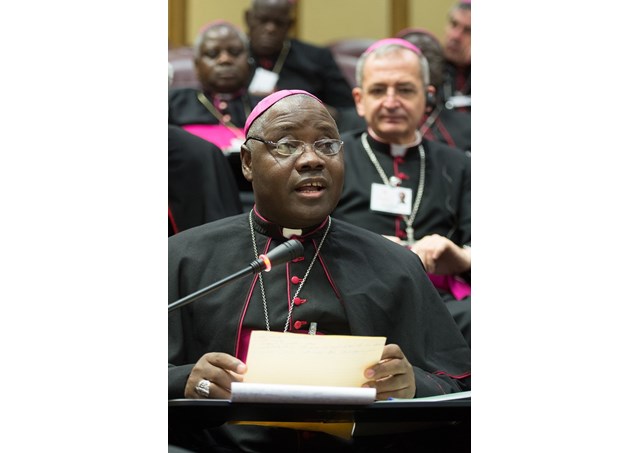 We are aware of hateful campaigns of calumny against the Catholic Bishops’ Conference of Nigeria (CBCN) because of their position that ‘same-sex unions’ are alien to Nigerian culture.

Since the increasing activism about homosexuality, lesbianism as well as bisexual and transgender rights in many parts of the world culminating in the signing into law by some countries of the West a bill which allows same-sex union, there has been also a deliberate attempt by some lobbyists and gay movements to denigrate and malign those countries, groups and individuals especially in Africa, who hold a contrary view. Those who oppose the same-sex union are now being perceived as ‘enemies’, because they do not support such a cause.

It is not surprising that Most Rev. Ignatius Ayau Kaigama, the Archbishop of Jos and the President of the Catholic Bishops’ Conference of Nigeria (CBCN) together with his colleagues in the Conference, have been black-listed into that category of people and therefore have become the subject of attacks for their uncompromising stand on the sanctity of marriage and family life.

We are aware of many of such hateful campaigns of calumny by some persons against the Catholic Bishops’ Conference of Nigeria (CBCN) because of their position that ‘same-sex union’ is alien to the Nigerian culture as well as against the natural law of creation.

For instance, the Gaystarnews, one of the leading gay movements online newspaper promoted the notion that Archbishop Kaigama and the Catholic Bishops’ Conference of Nigeria are supporting what they described as a “legislation to make participation in a same-sex marriage a crime punishable by 14 years imprisonment" and this is quoted in Wikipedia.

This is a blatant lie aimed not only to suppress the truth but also a vendetta by the gay rights lobbyists to demonise those they perceive are not supporting their mission to change the natural law of creation to suit their own whims and caprices. This is indeed uncharitable!

At different fora, Archbishop Kaigama has clarified the position of the Catholic Bishops’ Conference of Nigeria on this matter. In his opening remarks at the 13th Annual General Assembly of the Catholic Archdiocese of Jos Kaigama stated:

“The culture of 'same-sex marriage' is alien to our understanding of the family and should not be imposed on Nigerians. In wrongly reading the letter of the Catholic Bishops' Conference of Nigeria (CBCN) in January 2015 to President Goodluck Jonathan, some international organizations and the media instead of highlighting our biggest concern that marriage must be between a man and a woman, in accordance with our cultural and religious norms, mischievously reduced the CBCN position to advocating severe punishment of gays or lesbians with long prison terms! This is a deliberate distraction and a wicked deviation from what is our primary concern. In a recent statement, 'Our stand on Marriage, Family and Human Society', we re-emphasised our position: No to 'same-sex marriage'. As we say, in Nigeria, 'No shaking'.”

When the Daily Times journalist, Chijoke Kinsley in Jos on 25 August, 2015,  reported about the General Assembly, he deliberately chose to ignore the substance of the Archbishop's address on pastoral developments and concentrated on the same-sex issue; attributing to the Archbishop words he never used at all when he (journalist) wrote: "The President of Catholic Bishops of Nigeria and the Catholic Archbishop of Jos, Most Rev. Ignatius Kaigama, has reiterated that it was shameful, barbaric and madness on the part of those calling for same sex marriage... He said the Bishops’ Forum in Nigeria had taken a stand to resist what he described as “un Godly and evil for anybody to abandon the standard of God as regards marriage.”

Archbishop Kaigama we know is a careful and pastorally-minded prelate who would not have used such words as: "shameful", "barbaric", "madness", etc. to refer to anyone. These words were the mischievous imagination and fabrication of the reporter.

Similarly, the News Agency of Nigeria (NAN) posted a report  on  August 25, 2015 with the title, "Same-sex marriage alien to Nigerians" and emphasised that, "Kaigama said the Catholic Church does not only advocate severe punishment for gays or lesbians, it was also opposed to it and any other similar act".

There is certainly an obsession by some journalists about "severe punishment of gays or lesbians" and they try to twist the Bishops' statements to articulate their views. Nigerian Catholic Bishops are very responsible pastors who do not seek the punishment or jailing of persons who err, but to help them unto salvation.

In his opening address on the 13 of September, 2015, at the Second Plenary meeting of the Catholic Bishops’ Conference of Nigeria held in Port-Harcourt, the CBCN President noted:

“Returning to the encroaching LGBT lobby and the subject of "same-sex unions", the CBCN has emphatically and repeatedly said that it contradicts our cultural and religious norms of marriage which are defined as the union of man and woman (cf. Gn 2:24). What the CBCN supported, blessed and commended in their letter of 21st January, 2015 to former President Goodluck Jonathan was because the Nigerian government upheld the dignity and sanctity of marriage even in the face of all sorts of pressure from foreign governments of the Western world and international bodies to impose this on our country.

The issue is a hypersensitive one and touches on our moral, cultural and spiritual nerves. Therefore, in writing a letter to the former President, CBCN was worried about a culture that would distort the Nigerian understanding of marriage and family. The CBCN was far from advocating jail terms for homosexuals! The CBCN saw that there was an attempted invasion or even usurpation of our moral, cultural and spiritual space by those who work to impose "same-sex union" on our people. The CBCN was informed that people at the highest level of government were being economically cajoled by foreign organizations to legislate in favour of "same-sex union". The Bishops felt that our moral pillars were being shaken, social fibre being attacked and cultural roots in danger of being dried up.

When therefore the federal government resisted the attempt to impose this culture on Nigerians by legislating against "same-sex union", the Catholic Bishops of Nigeria felt a sense of great relief and issued a statement to affirm Government's decision.

Unfortunately, this has been mischievously and deliberately reported as the CBCN is asking government to jail people with different sexual orientations.

We hereby again emphatically deny that misleading position. The Bishops simply did their moral duty to prevent the spread of a culture (gay and lesbian) that is alien to us. In any case, since that legislation, no one has brought their attention to the fact that anyone has been convicted, persecuted or sent to jail. If there are any such people they should confide in us and see what the pastorally-charitable response from the Nigerian Bishops would be.

As with other pastoral cases, we shall provide a pastoral response for such people. Those who are said to flee the country seeking asylum elsewhere do so for other undisclosed reasons, certainly not because of their persecution as gays or lesbians.

The Catholic Bishops always try to rescue people from jail not to send them there. Our communiqués since 1960 show that we stand on the side of justice and charity and would never support the flagrant violation of people's rights.

It is an absurdity to accuse the Nigerian Catholic Bishops of supporting and sending people to jail! Our stand was and is "no to same sex union" and "no to spreading of the homosexual culture" which can only complicate our struggle to uphold traditional, religious, moral values in our country. Our commitment to providing justice to those whose rights are unfairly violated is unwavering. The Year of Mercy declared by Pope Francis calls us even now to do more.”

It is therefore important to place on record that no amount of calumny, intimidation, lies and name-calling will make the Bishops to change their stand on marriage and family life or abdicate their moral responsibility in speaking out clearly against the same-sex issue.