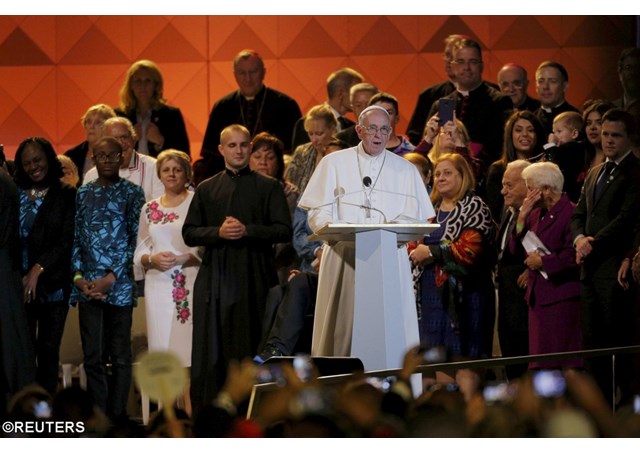 (Vatican Radio) The world is a complex place, and its problems cannot be fixed at one go. Nevertheless, “the contribution of the Pope has been huge,” and America has heard and received his message. This is the nutshell version of the concluding review the Director of the Press Office of the Holy See, Fr. Federico Lombardi, SJ, gave to Vatican Radio on Sunday, following the final press briefing on the last day of Pope Francis’ Apostolic Voyage to the United States.

Below, please find the audio and full transcript – edited for clarity – of Fr. Lombardi SJ’s conversation with Vatican Radio's Chris Altieri, in the United States:

CRA:      As the visit has now entered its final stage, what can you say has been the Holy Father’s central message and has it been received?

FLSJ:      Yes. The points of the message of the Pope were many, obviously – because he has spoken for the entire world, for the American Congress, and also for families and for the Church. We have not to forget that for the Pope, the first intention of this trip was the World Day of Families – and in this sense I think that he has succeeded in keeping this message, this attention for families[front and center] during the entire journey. From Cuba, on, every time he has addressed anyone – important authorities, too: President Obama, the Congress, the United Nations – he has always recalled the importance of the family, through to these [final days in Philadelphia], in which he has [proclaimed] the beauty of the Gospel of the Family as a “factory of hope” – I think he was very successful in finding this strong expression.

CRA:      How do you think he has been received, especially by the people?

FLSJ:      Wonderful, wonderful, wonderful – I think maybe more than expected – or perhaps [not more than expected], because he knows how the people love him, and we have had also in these big American cities, the people on the street with spontaneous enthusiasm. In this sense, it was a very positive experience for him and for us, who travel with him, to see how the people – the “normal” people, who are in different countries love him and understand his message – even if he was not so perfect in English – his communication was good. People have understood.

CRA:      Going forward now, has the Holy Father planted the seeds of his message, and will they take root – is there reason to hope?

FLSJ:      Surely. We hope that this will happen in the future, [that his message will take root]. Sure: he has done very much. We cannot solve all the problems of history in one [go], but we try always to give our contribution [to the cause]. The contribution the Pope has given has been huge.