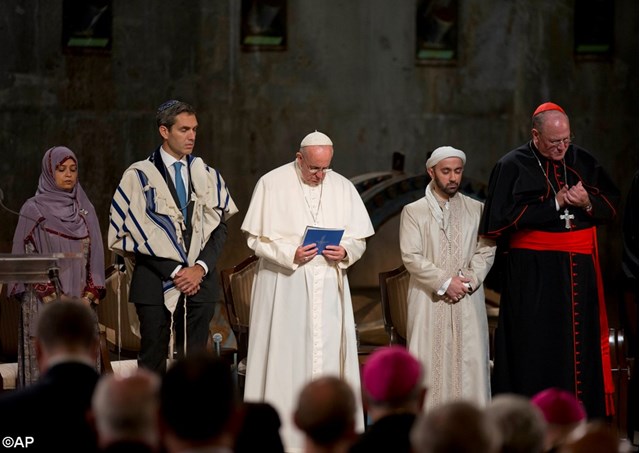 (Vatican Radio) Pope Francis on Friday visited the Headquarters of the United Nations, prayed with peoples of different faiths at the Ground Zero Memorial, laughed with immigrant children at Our Lady Queen of Angels School in Harlem, and celebrated Mass at Madison Square Garden.

Vatican Radio's Chris Altieri is in the US with Pope Francis and revisits the Holy Father's busy Friday in this report:

Tranquillitas ordinis – the tranquility of order: this is the expression of the meaning of peace, which St. Augustine gives in Book XIX of his monumental City of God, and it was the unspoken idea that served as the gravitational center of Pope Francis’ activities on Friday, September 25th, 2015, in New York.

Order is almost a dirty word in this day. Nevertheless, without order in national and international affairs, without order in the souls of citizens, the world would exist in a state of naked and total war – of all against all, and of each against himself.

The wisdom – another suspect idea in this jaded and even cynical age (all the more jaded and cynical for the depth of our desire to believe) – which Pope Francis sought to share at the United Nations consisted in his vision of a world in which souls rightly ordered – insofar as possible this side of the celestial Jerusalem – would work together to guarantee a just disposition of the things of the earth, and live in harmony with the created order, over which humanity has been placed as steward, not as tyrant. Human nature participates in the natural order and transcends it, carrying in itself the image and likeness of the Divine Creator – and every human being bears that image and that likeness, regardless of, age, race, sex, or circumstance. “The defense of the environment and the fight against exclusion demand that we recognize a moral law written into human nature itself, one which includes the natural difference between man and woman, and absolute respect for life in all its stages and dimensions,” said Pope Francis.

“Without the recognition of certain incontestable natural ethical limits and without the immediate implementation of those pillars of integral human development,” he continued, “the ideal of ‘saving succeeding generations from the scourge of war’,” and, “‘promoting social progress and better standards of life in larger freedom’, risks becoming an unattainable illusion, or, even worse, idle chatter which serves as a cover for all kinds of abuse and corruption, or for carrying out an ideological colonization by the imposition of anomalous models and lifestyles which are alien to people’s identity and, in the end, irresponsible.” Pope Francis discovered the expression of that great an noble ideal in the text of the Preamble to the UN Charter.

At the September 11th memorial at the World Trade Center, a scene that has been built to stand as a reminder at once of the terrible ungodliness of which men are capable and of the bottomless resolve of a free and great-hearted people not to cede to the brutish or to the devilish tendencies in our fallen nature, Pope Francis reminded us that peace – in our hearts and in our affairs – is only possible as a gift from heaven.  “Let us implore from on high the gift of commitment to the cause of peace,” he prayed. “Peace in our homes, our families, our schools and our communities.  Peace in all those places where war never seems to end.  Peace for those faces which have known nothing but pain.  Peace throughout this world which God has given us as the home of all and a home for all.”

At the elementary school dedicated to Our Lady Queen of Angels in the afternoon, Pope Francis encouraged the spirit of wonder in God’s littlest ones, praising the spirit of adventure and hope that brought many of them and their families to these shores – and he reminded those already here of where they came from, and of what we can do together before we all get where we all are going.

Finally, Pope Francis offered Mass, during which he especially called the young people present to go out and become missionaries of the peace they have encountered in their lives, in the person of the Prince of Peace: our Lord and Savior, Jesus Christ. “He opens before us the path of peace,” said Pope Francis, that peace which is born of accepting others, that peace which fills our hearts whenever we look upon those in need as our brothers and sisters.”

On Saturday, when Pope Francis travels to Philadelphia, the focus will shift to the family, the domestic Church, the natural form of human society, and the school of peace in this and every age.