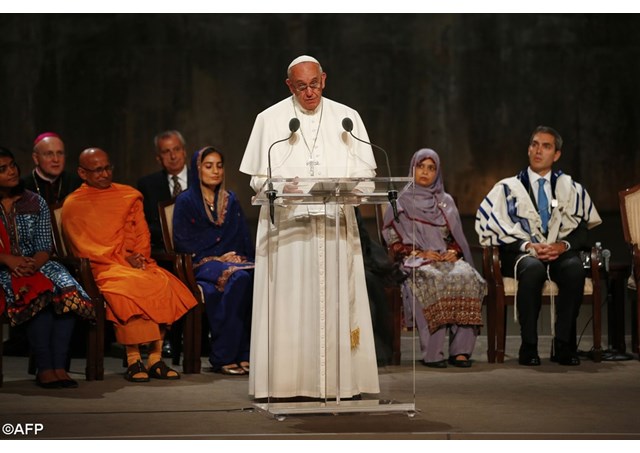 (Vatican Radio)  In an address to an Interreligious Meeting at the Ground Zero Memorial in New York, Pope Francis said on Friday (24th September) “we can and must build unity on the basis of our diversity of languages, cultures and religions.” Speaking at the site of the September 11th terrorist attacks, he told those present that “together, we are called to say “no” to every attempt to impose uniformity and “yes” to a diversity accepted and reconciled.” The Pope described Ground Zero as a place where "we shed tears" and mourn those who were the victims of a “mindset that knows only violence, hatred and revenge.”

Pope Francis’s visit to the Ground Zero Memorial in New York and his meeting with other faith leaders there was a highly poignant moment during his U.S. visit. The Memorial Park marks the place where nearly 3,000 people lost their lives in the 9/11 terrorist attacks in 2001 when two planes flew into both of the World Trade Center’s Twin Towers, causing them to collapse shortly afterwards. It was the worst-ever single terrorist incident on U.S. soil. After praying silently for the victims, the Pope laid a white rose at the edge of one of the two massive waterfall pools where the names of those who died are inscribed.  He then met the family members of some of those victims of the 9/11 attacks. Many of them were fire fighters and other rescue workers who had gone to the scene after the planes crashed into the Twin Towers and then lost their lives when the towers collapsed.

Afterwards the Pope headed below ground to the National September 11th Museum for an interfaith meeting that was attended by 12 religious leaders including a Rabbi and an Imam from New York. In his address to the gathering, Pope Francis said Ground Zero was a place where “we shed tears” when thinking of those who were victims of “a mindset which knows only violence, hatred and revenge.” This is a place, he continued, where “we weep out of a sense of helplessness in the face of injustice, murder and the failure to settle conflicts through dialogue.”

Pope Francis said he hoped their presence together will be a powerful sign of their shared desire to be a force for reconciliation in this community and throughout the world.  He went on to warn against attempts to create “a rigid uniformity,” saying “we can and must build unity on the basis of our diversity of languages, cultures and religions. Together, he continued, “we are called to say “no to every attempt to impose uniformity and “yes” to a diversity accepted and reconciled.”  However, he pointed out that this can only happen if we uproot from our hearts all feelings of hatred, vengeance and resentment.

Please find below an English translation of the Pope’s address at the Interreligious Meeting held at the Ground Zero Memorial in New York:

I feel many different emotions standing here at Ground Zero, where thousands of lives were taken in a senseless act of destruction.  Here grief is palpable.  The water we see flowing towards that empty pit reminds us of all those lives which fell prey to those who think that destruction, tearing down, is the only way to settle conflicts.  It is the silent cry of those who were victims of a mindset which knows only violence, hatred and revenge.  A mindset which can only cause pain, suffering, destruction and tears.

The flowing water is also a symbol of our tears.  Tears at so much devastation and ruin, past and present.  This is a place where we shed tears, we weep out of a sense of helplessness in the face of injustice, murder, and the failure to settle conflicts through dialogue.  Here we mourn the wrongful and senseless loss of innocent lives because of the inability to find solutions which respect the common good.  This flowing water reminds us of yesterday’s tears, but also of all the tears still being shed today.

A few moments ago I met some of the families of the fallen first responders.  Meeting them made me see once again how acts of destruction are never impersonal, abstract or merely material.  They always have a face, a concrete story, names.  In those family members, we see the face of pain, a pain which still touches us and cries out to heaven.

At the same time, those family members showed me the other face of this attack, the other face of their grief: the power of love and remembrance.  A remembrance that does not leave us empty and withdrawn.  The name of so many loved ones are written around the towers’ footprints.  We can see them, we can touch them, and we can never forget them.

Here, amid pain and grief, we also have a palpable sense of the heroic goodness which people are capable of, those hidden reserves of strength from which we can draw.  In the depths of pain and suffering, you also witnessed the heights of generosity and service.  Hands reached out, lives were given.  In a metropolis which might seem impersonal, faceless, lonely, you demonstrated the powerful solidarity born of mutual support, love and self-sacrifice.  No one thought about race, nationality, neighborhoods, religion or politics.  It was all about solidarity, meeting immediate needs, brotherhood.  It was about being brothers and sisters.  New York City firemen walked into the crumbling towers, with no concern for their own wellbeing.  Many succumbed; their sacrifice enabled great numbers to be saved.

This place of death became a place of life too, a place of saved lives, a hymn to the triumph of life over the prophets of destruction and death, to goodness over evil, to reconciliation and unity over hatred and division.

It is a source of great hope that in this place of sorrow and remembrance I can join with leaders representing the many religious traditions which enrich the life of this great city.  I trust that our presence together will be a powerful sign of our shared desire to be a force for reconciliation, peace and justice in this community and throughout the world.  For all our differences and disagreements, we can live in a world of peace.  In opposing every attempt to create a rigid uniformity, we can and must build unity on the basis of our diversity of languages, cultures and religions, and lift our voices against everything which would stand in the way of such unity.  Together we are called to say “no” to every attempt to impose uniformity and “yes” to a diversity accepted and reconciled.

This can only happen if we uproot from our hearts all feelings of hatred, vengeance and resentment.  We know that that is only possible as a gift from heaven.  Here, in this place of remembrance, I would ask everyone together, each in his or her own way, to spend a moment in silence and prayer.  Let us implore from on high the gift of commitment to the cause of peace.  Peace in our homes, our families, our schools and our communities.  Peace in all those places where war never seems to end.  Peace for those faces which have known nothing but pain.  Peace throughout this world which God has given us as the home of all and a home for all.  Simply PEACE.

In this way, the lives of our dear ones will not be lives which will one day be forgotten.  Instead, they will be present whenever we strive to be prophets not of tearing down but of building up, prophets of reconciliation, prophets of peace.