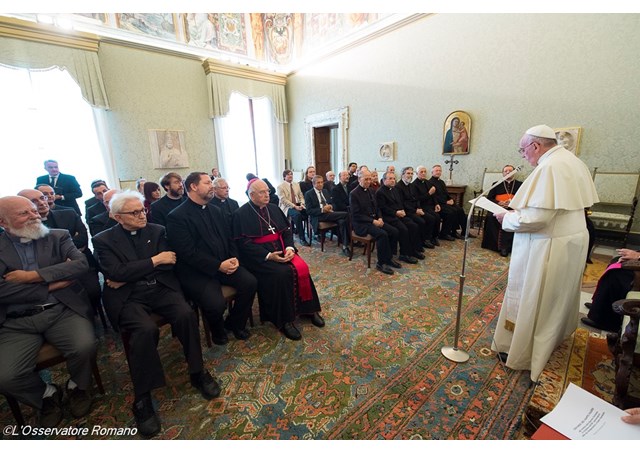 (Vatican Radio) Pope Francis on Friday (18th September) addressed participants at a symposium organized by the Vatican Observatory, saying their scientific research on the universe can help promote interreligious dialogue which is more urgent than ever nowadays. He also encouraged an ever deeper dialogue between science and religion.

The pope began his address to the participants of the symposium by recalling the history of the Vatican Observatory in Castel Gandolfo which was formally inaugurated by Pope Pius XI back in 1935 with the words “Deum Creatorem venite adoremus” carved into the wall. The Observatory’s management was entrusted to the Society of Jesus.

Quoting from his encyclical Laudato Si, the Pope said: “Rather than a (scientific) problem to be solved, the world is a joyful mystery to be contemplated with joyness and praise.”  “The entire material universe speaks of God’s love, his boundless affection for us.”

Pope Francis noted that the participants at the symposium were discussing themes related to the dialogue between science and religion and recalled the words of Saint John Paul who in a letter to a previous director of the Vatican Observatory stressed the need for an ever deepening dialogue between the two. He said such a dialogue, whilst protecting the integrity both of religion and science, should, at the same time, promote progress for both.

The pope said when it comes to interreligious dialogue, which nowadays is more and more urgent, scientific research on the universe can offer a unique perspective, shared by believers and non-believers, which helps us to reach a better religious understanding of creation.  It’s for this reason, he said, that the Astrophysics (Summer) Schools that the Observatory has organized during the past 30 years are a precious opportunity for young astronomers from across the world to dialogue and collaborate in the search of truth.

The Pope noted that the symposium was also discussing the importance of communicating the message that the Church and its pastors are embracing, encouraging and promoting authentic science. He concluded his address by telling the participants that it was very important for them to share the gift of their scientific knowledge of the universe with other people, freely giving what they received for free.  I encourage you, he said, to continue along this journey of exploring our universe.