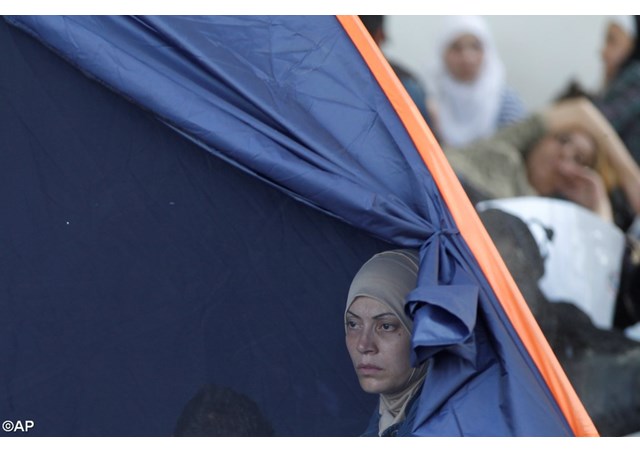 (Vatican Radio) Thousands of Syrian and other refugees have been dumped by Croatian authorities near the Hungarian border. The developments have added to frustration among refugees and added to tensions between neighbouring countries.

Angry police try to control thousands of exhausted refugees sitting on grass fields and crowding patrol stations along the road of this Croatian border town of Beli Manestir. Some arrived in buses, others by train.

They have been dumped here by Croatian police after crossing into the country from Serbia. Nearby is European Union nation Hungary, a key transit country towards the Western countries. Most of them want to go there.

But Hungary has sealed of its borders for refugees. It also summoned Croatia's ambassador to complain that Croatia is dumping refugees near Hungary.

Slovenia, the other key EU country, is also not welcoming these men and many women and children.

Now they have nowhere to go. Their future is uncertain. A young Syrian refugee, who says he was innocently tortured and jailed by the Syrian regime, is desperate. The student, who identifies himself as Mohamed, arrived in Croatia through Serbia.

He and others tried to enter Hungary, but were pushed back by baton wielding Hungarian police, who also used tear gas. "The situation was yesterday. We were in Hungary. But the Hungarian police fired (tear) gas at us," he recalled.

"The United Nations refugee agency advised us to go to Croatia. We asked then: if we are in Croatia can we go to Slovenia? But they said: We don't know."

Some residents in this Croatian town of Beli Masterir try to help refugees. But it's difficult explains villager Mark Bogadic. "It is not a common situation As you can see people are camping in the streets, in the parks. It's very difficult," he said.