Card. Parolin on Papal visit to Cuba and the U.S. 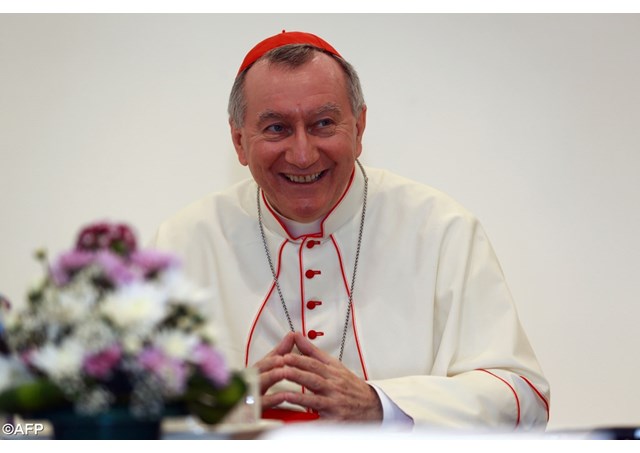 (Vatican Radio) Cardinal Pietro Parolin says migration will be one of the most important themes raised by Pope Francis during his visit to Cuba and the U.S. from the 19th to the 28th of September. Speaking in a wide-ranging interview with the Vatican Television Centre, Cardinal Parolin also confirmed that the Pope would definitely relaunch his message during his speeches to the U.S. Congress and the United Nations about the need to care for creation that was at the heart of his recent encyclical Laudato Si. The cardinal spoke too about how he hoped the canonization of Blessed Junipero Serra, a Spanish Franciscan missionary, would encourage integration within the U.S. Church of an increasingly relevant and important Hispanic component in the nation.

Asked first about the journey to Cuba and the rapprochement between Havana and Washington, Cardinal Parolin reiterated the Holy See’s view that the (U.S.) economic embargo against Cuba should be lifted.  At the same time, he said the bishops hoped that this step could be accompanied “by a greater opening (in Cuba) when it comes to freedom and human rights.”

Touching next on the Pope’s visit to the Shrine of Our lady of Charity of Cobre in Cuba, Cardinal Parolin said it was a “normal” thing to do, because of “the strong Marian devotion of the Latin American and Cuban people” and by going there the Pope would encounter the heart of the Caribbean island and its people.

Asked next whether migration would be one of the main themes of the papal visit to the U.S., Cardinal Parolin said he was sure this would be the case because this is an issue very keenly felt by the Pope to which he often refers.  The Cardinal said it was his earnest hope that this encounter between the Pope who is carrying this problem within his heart and a nation that has experienced many waves of migrants landing on its shores “can offer some guidelines” for resolving this ongoing migration crisis.

During his visit to the U.S. Pope Francis is due to canonize blessed Junipero Serra, a Spanish Franciscan missionary, whom he has described as the founding father of the United States.  When asked whether this event is a call for the U.S. to rediscover its Spanish and Catholic history, Cardinal Parolin agreed.  He said the main message offered by this canonization is to encourage integration within the U.S. Church of an “increasingly important and relevant Hispanic component” in the nation.

Turning next to two keenly awaited speeches by Pope Francis, one to the U.S. Congress and another to the United Nations, Cardinal Parolin was asked whether the Pope is likely to relaunch the message contained within his Laudato Si encyclical.  He replied saying “yes, definitely” but added that he believed the Pope’s remarks would extend beyond the issue of climate change and encompass a “more integral ecology” that takes into consideration the transcendental nature of the human person possessing fundamental rights, “especially the right to life and religious freedom.”

Asked about the criticism that have been raised by some in the U.S. who consider the papal encyclical an excessively strong attack on the capitalist system, Cardinal Parolin responded by saying he believed the Pope would invite everybody to reflect on those issues, adding that it was realistic to realize that “things are not going in the right direction” and therefore there’s also a need to find ways of solving this. “We need a change,” he said.

The final question put to Cardinal Parolin concerned the Pope’s meeting with families from around the world in the U.S. city of Philadelphia and whether that would be the final chance to listen to families on the road leading to next month’s Synod of Bishops on the Family taking place in the Vatican. The Cardinal said he agreed with that and said what will emerge from this meeting is the beauty of the family and the help that the Gospel can offer to families.  He said this would be the positive side, without forgetting the great challenges on this issue.  Concluding, the cardinal said the meeting in Philadelphia would give the whole Church “a new enthusiasm” and a desire to proclaim the gospel of the family, whilst at the same time, “helping families who find themselves in whatever type of difficulties in living the Gospel in its fullness which is a source of joy, peace and happiness for all.”