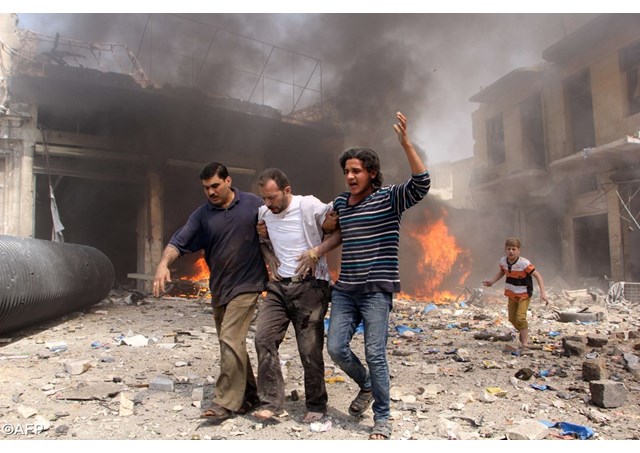 (Vatican Radio)  The Chaldean Bishop of Aleppo, Antoine Audo, warned this week that only 50,000 Christians are now left in the city which has seen some of the fiercest fighting in Syria’s ongoing civil war. He urged the international community to provide help to enable Christians to remain in Syria and carry on bearing witness to their faith.

Speaking at a press conference in Rome on Wednesday (16th September)  jointly organized by the Catholic charity, Aid to the Church in Need and Italy’s Foreign Press Association, Bishop Audo, described how there had been a recent “massive exodus” of people from Aleppo, especially after Germany and some other EU nations expressed their willingness to accept Syrian refugees fleeing the conflict in their homeland. He said “Those who were able to leave, have already left, others are trying to leave the country, especially our young men who fear military service and don’t want to take part in a senseless war that only brings destruction.”

The ongoing emigration from Aleppo has also hit the city’s Christian community hard. The Syrian Bishop noted that before the war, there were around 150,000 Christians living in Aleppo but he now believes they barely number 50,000. He warned: “Our great fear is that our community could disappear altogether.”

Turning to the humanitarian situation in Aleppo, Bishop Audo said after four and a half years of war, things have become “unbearable” for the population. “The wealthy have already left, the middle classes have become poor and the poor are now living in total misery.” More than 80 percent of the population is unemployed and the city has been without water and electricity for more than two months.  The bishop said “Our church has a well and we try to distribute water to the population as much as we can. In every street there are young children and teenagers carrying empty bottles who are out looking for water.”

Bishop Audo also lamented the lack of any political solution aimed at ending the war. He said he believed that there was an international desire for the war to continue, and also what he called “a military strategy to gain time and spread violence through the entire region, to stir up divisions and maybe sell arms.”