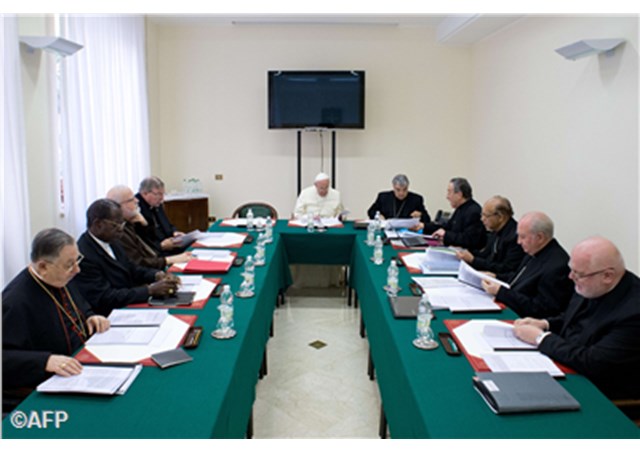 (Vatican Radio) The head of the Vatican press office, Fr Federico Lombardi, held a briefing for journalists on Wednesday to report on the work of Pope Francis’ council of nine cardinals which has been meeting at the Casa Santa Marta since Monday.

The closed door encounter of the Pope and his closest advisors focused on the ongoing process of establishing two new Congregations to bring together the work of several existing Pontifical Councils. In particular, the C9, as it’s called, approved a project for the setting up of a Congregation to deal with laity, family and life issues, presented by Cardinal Dionigi Tettamanzi, the former archbishop of Milan. That project is now awaiting final approval from Pope Francis, though Fr Lombardi gave no further details regarding the scope or mandate of this new institution.

The cardinals also continued discussions on the formation of a second Congregation dealing with charity, justice and peace, as well as reflecting on the existing process of selecting and appointing new bishops in light of the challenges facing the Church today.

The head of the newly formed Secretariat for Communications, Msgr Dario Viganò reported back to the cardinals on the ongoing work to integrate the nine different institutions that make up the Vatican media machine. In particular he has set up a working group to study the legal and administrative work involved and to move towards the drawing up of a statute for the new Secretariat.

Finally, the cardinals also continued discussions on the work of the Pontifical Commission for the Protection of Minors. In particular, Fr Lombardi said the cardinals stressed the importance of seeking to speed up the process of dealing with outstanding cases of sexual abuse.

Just one of the C9 group, Cardinal Oscar Rodriguez Maradiaga of Honduras, was absent from the meeting for health reasons. Participants agreed to hold their next encounter from December 10th to 12th.