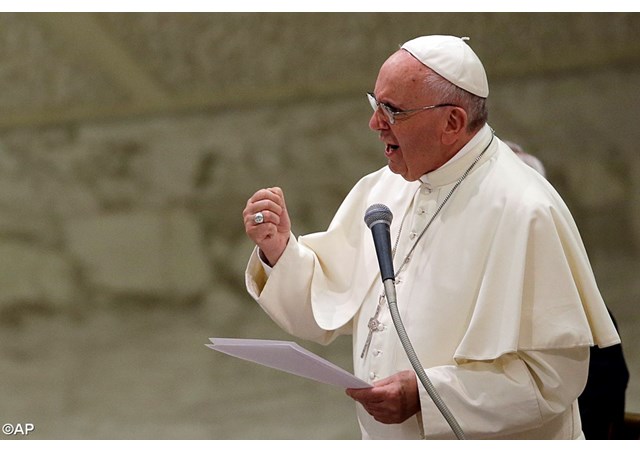 (Vatican Radio) Pope Francis spoke about the refugee crisis during an interview with Portugal’s Radio Renascença which aired on Monday, calling it the “tip of an iceberg.”

“These poor people are fleeing war, hunger, but that is the tip of the iceberg. Because underneath that is the cause; and the cause is a bad and unjust socioeconomic system, in everything, in the world – speaking of the environmental problem –, in the socioeconomic society, in politics, the person always has to be in the centre,” Pope Francis said.

The Holy Father said the world must work to help people not feel the need to emigrate.

“Where the causes are hunger, we have to create work, investments. Where the cause is war, search for peace, work for peace,” he said. “Nowadays the world is at war against itself, that is, the world is at war, as I say, in instalments, bit by bit, but it is also at war against the land, because it is destroying the land, our common house, the environment.”

The Pope did, however, admit welcoming refugees is not a riskless proposition.

“I recognize that, nowadays, border safety conditions are not what they once were,” Pope Francis said. “The truth is that just 400 kilometres from Sicily there is an incredibly cruel terrorist group. So there is a danger of infiltration, this is true.”

The Pope said Rome itself would not be immune from this this threat.

“But you can take precautions, and put these people to work,” he said. “But then there is another problem, that Europe is going through a very big labour crisis.”

The Holy Father pointed out immigration is an international and timeless phenomenon, and added the low birthrate in Europe is creating “empty spaces,” which others will try to fill.

“If a country has no children, immigrants come in and take their place,” he said.

“I believe Europe’s greatest challenge is to go back to being a mother Europe,” Pope Francis said, as opposed to a “grandmother Europe.”

Later in the interview, the Pope mentioned this was also his concern for the Church – “become too much of a grandmother, instead of a mother, incapable of generating life” – and he said he hoped the Jubilee of Mercy will allow people to “experience the Church as mother.”

Pope Francis also used the interview to ask people to “pray a lot” for the upcoming Synod on the Family.

“We have high expectations because, obviously, the family is in crisis,” he said. “Young people no longer get married. They don’t get married.”

He also said the Synod would look at ways to help those families living in situations contrary to Church teaching.

“At the synod we will be speaking about all the possible ways to help these families,” Pope Francis said. “But one thing should be very clear – something Pope Benedict left quite clear: people who are in a second union are not excommunicated and should be integrated into Church life. This was made crystal clear. I also said this quite clearly: Drawing closer to the mass, to catechesis, their children’s education, charity… There are so many different options.”

Pope Francis admitted his life after becoming Pope has been an adventure, but said “I did not lose the peace."

An English translation of the full interview can be found here.