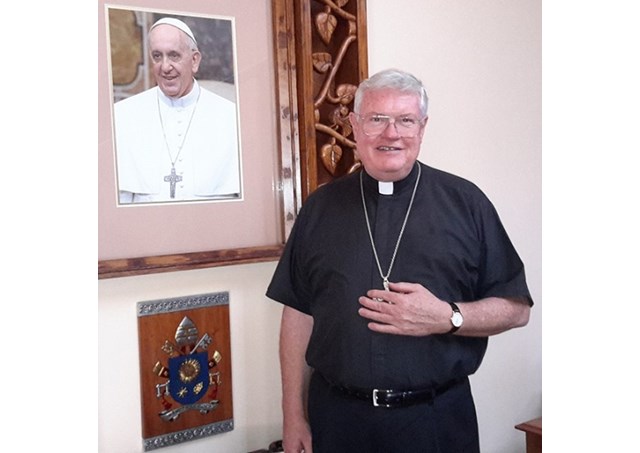 The Apostolic Nuncio in Kenya (and South Sudan) Archbishop Charles Daniel Balvo has said that the proposed Apostolic visit of the Holy Father to Africa, the first to the continent since he became Pope, is being worked on, revealing that the trip would involve three capitals beginning with Nairobi in Kenya, then Uganda’s capital Kampala and conclude with Bangui, the capital of the Central African Republic.

In an exclusive interview with CANAA on Tuesday, 25 August at his residence in Nairobi, Archbishop Balvo said that an official statement about the proposed November Apsotolic visit will be released in September and the full formal announcement including details of the trip published sometime in October.

The proposed pastoral visit by the Holy Father is being scheduled for the last week in November.

Meanwhile, Rose Achiego of Catholic Waumini communications in Kenya has told Vatican Radio's English Service for Africa that the The Chairman of the Kenya Conference of Catholic Bishops (KCCB), Bishop Philip Anyolo,yesterday 27 August, officially announced the coming of Pope Francis to Kenya in a letter to the Christian faithful issued on behalf of the Bishops. Bishop Anyolo said, “The Holy Father has accepted our invitation and will visit Kenya in November 2015.”

Bishop Anyolo, who is the Bishop of Homabay also revealed that the Pope’s visit is a state and pastoral visit, hence the Church will collaborate with the Government of Kenya on logistics.

Below is the full interview with the Apostolic Nuncio in Kenya and South Sudan, Archbishop Balvo about the proposed trip of the Holy Father to Africa.

CANAA: On June 12 this year, the Holy Father reportedly confirmed his first trip to Africa since becoming Pope. He said that he would visit the Central African Republic and Uganda in November this year, and that Kenya would only be a possibility. What do you know lately about the Pope’s visit to Africa?

Apostolic Nuncio: Earlier than this, when he was returning from Asia last year, in one of his conversations with the journalists, he indicated his interest (to visit Africa). He had mentioned first to Central African Republic and also Uganda. I think it was in relation to the political situation in Central African Republic, the serious unrest, the violence, that was a concern to him. These kind of things, migrants, immigrants, places where there is some social unrest, are of special concern to him. If people can remember, the first trip out of Rome that he made was to the small island of Lampedusa, where many of the migrants on these ramshackle boats that leave the North African coast often end up.

As far as I am concerned, when I was first informed in the middle of June (2015), the capitals of the three countries were on the Pope’s planned trip: Nairobi, Kampala, and Bangui. I don’t know if the visit of the Kenyan Bishops after Easter for their Ad Limina probably had something to do with it, because when the Pope receives bishops from all over the world for their Ad Limina visits, I’m sure they all say, ‘Holy Father come and visit us.’

Considering that he wanted already to come to East and Central Africa, adding Kenya and considering Nairobi as a major hub for Eastern Africa, then this would be the first stop. In essence, from my first hearing of this, Kenya was part of the programme.

CANAA: As far as I know, there has not yet been a formal announcement about the Pope’s visit to Kenya. When can we expect this?

I have an idea obviously of the programme here, but I do not know at all what is going to take place in Uganda specifically. There is always going to be Mass in any of these places. In Kampala you have the Martyrs’ shrine in Namugongo and the Pope is surely going there.

CANAA: Even as we wait for the formal announcement and the official release of the schedule, what kind of programme do you foresee?

Apostolic Nuncio: There are activities that are already in the planning. There is the welcoming at the Airport on Wednesday afternoon. At that point, it is the State involvement and there is the welcome at State House. On Thursday, there will be Mass, the meeting with priests and religious, then there will be a short visit to the United Nations office in Gigiri, Nairobi. Friday morning, there will be a visit to a slum, and then the youth at Kasarani Stadium, then he leaves in the afternoon for Uganda.

So, we have a proposed schedule, we have to put specific times and places. We have concrete ideas, we just have to finalise them. The visit as planned will be from here (in Nairobi), Wednesday the 25th  (November )to Friday the 27th midday-afternoon, then he continues on to Uganda, and as far as I know, two nights in Uganda and one night in Central African Republic.

CANAA: This is going to be a complex visit involving the State and the Catholic Church in Kenya, isn’t it?

Apostolic Nuncio: The Papal visits are always pastoral visits. They have some governmental State aspects to them, but the primary purpose is to visit the local Church in each and every place that the Pope goes to, but there is always some relationship with the host government as well. Here that will take place pretty much at the beginning. But the day-and-a-half that the Pope is really here is dedicated to the Church.

CANAA: What preparations would you recommend for ordinary citizens of these countries, ahead of the Papal pastoral visit?

Apostolic Nuncio: Well certainly the local Church through the Bishops’ Conferences has Commissions to prepare the different aspects of the visit. It is obvious that in any Papal visit anywhere, not everyone can see the Holy Father, or hear him, that can’t just happen. He is just coming to Nairobi and there is going to be a limited number of people who’ll actually see him and hear him speak.

The Bishops have the theme for the visit, “To stay strong in the faith.” In parishes, they (faithful) can participate in organised activities like Masses, talks, prayer sessions, Small Christian Communities to reflect upon the faith.

CANAA: As the representative of the Pope in Kenya and South Sudan, the Pope, or at least the Pope’s representatives at the Vatican, will surely be consulting with you ahead of this pastoral visit. What do you think will be his message when he finally comes?

Apostolic Nuncio: As far as the Holy Father’s message is concerned, he will receive suggestions from the local Bishops and the Nuncio along some themes and ideas. But we don’t know what is in his heart and what he wants to say here. We will not know that until he actually says it.

The Holy Father is the shepherd of the Church throughout the world. He has a message for the Americans, for Latin Americans, for Europeans, for Asians; what his message will be specifically for Africans, we’ll know when he comes. We know already some main themes of his Papacy: the notion of the Church as being open and welcoming, inclusive, as he says the world being a battlefield and the Church is a field hospital, helping people who are trying to respond to the needs of humanity. These are obviously general themes: poverty, simplicity, humility. Any specific idea that he may have at the back of his mind that he wants to communicate in his first trip to Africa, that we’ll know when he comes.

CANAA: What does this visit mean to you personally?

Apostolic Nuncio: Well, I have had the experience of Papal visits. In 1997, I was the Secretary at the Nunciature in the Czech Republic when the Pope (John Paul II) made a trip there; it was the commemoration of 1,000 years of a particular saint of that region.

In the year 2000 when Pope John Paul II wanted to commemorate the great Jubilee with pilgrimages to different places, he started his Holy Land trip in March 2000 in Jordan where I was assigned. There, I was alone in the Nunciature in the sense that the Nuncio lived in Iraq and because of the embargo at the time, communications were reduced, traveling was only by road, so the Nuncio would only come from time to time, so I had a lot to do with the local Church of course. So, that was invaluable experience for me to know in general the kind of things you need to do for the preparation of a Papal visit and there are pretty much the same. You have to organize all the things about the press and communications, security, transportation, and then what is going to happen, the various liturgies or encounters, the meetings, prayers, etc.

The Commissions of the Bishops’ conference and their committees will do the bulk of the work for the local Church. The State has its part, but that is really very limited, whereas much of the footwork will be done by the local Church.

CANAA: You have talked about a limited number of people being able to actually see the Pope during his visit. How do you think the limiting of people can be handled?

Apostolic Nuncio: I really don’t know how they will do it. In certain places, and I say this from my lived experience that I had from my home country in the Archdiocese of New York when they had these events, each parish is given a certain number of pass tickets. Then it is up to the Parish Priest. They may have a lottery.

It will really be up to the Bishops how they do it for the different dioceses, parishes, institutions, and all those who will be able to participate. The rest, obviously you have communications and I am sure that certain events like the Mass and the youth gathering can be transmitted by the Kenyan television and broadcast on radio, so that people can have access. I realise that in rural areas the access is limited, but most people can somehow get radio.

CANAA: Any last message with regard to the visit of the Holy Father to this part of the world?

Apostolic Nuncio: Well, I know that the Bishops here have chosen as their theme “To stand strong in the faith,” and I think that when the Holy Father comes, one of the tasks that Jesus gave to St. Peter (and just before he denied that he had known Jesus) was to strengthen his brothers in the faith. I think the Holy Father wants to do that, to strengthen his brothers and sisters in the faith, his presence to be a kind of something that will push people to encourage to live their faith not only interiorly in their life of prayer but also in their life in influencing society so that the society in Kenya can also be even more filled with the values, which come from the gospel for our faith.