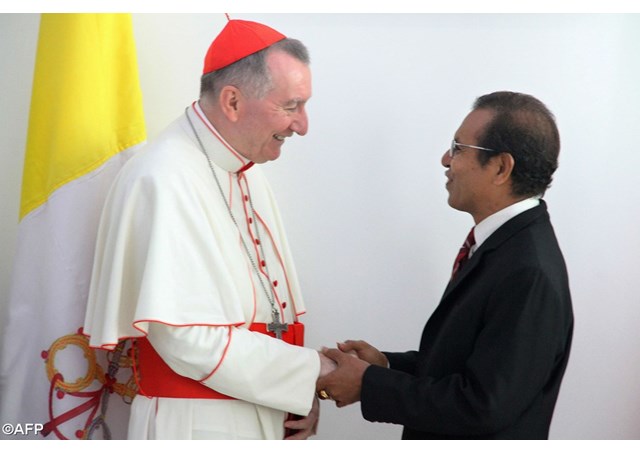 Vatican Secretary of State, Cardinal Pietro Parolin marked 500 years of the Catholic Church in East ‎Timor on Saturday, exhorting East Timorese to proclaim with faith and action the Good news they ‎received with joy 500 years ago.  The cardinal who represented Pope Francis at the celebration, marked ‎the event with a solemn Mass on the liturgical feast of the Assumption in the capital Dili.  ‎

Dominican missionaries established the Catholic in 1515 in ‎Timor island that was a Portuguese colony. ‎Following the departure of the Portuguese in 1974, East Timor declared independence ‎amidst ‎political ‎turmoil, but Indonesia invaded the territory the following year and occupied it under a ‎brutal ‎rule until ‎‎2002 when the territory East Timor regained sovereignty.  The new nation thus became ‎only the second predominantly Catholic country in Asia after ‎the ‎Philippines.  ‎

Commenting on the day’s Gospel on John the Baptist leaping with joy in Elizabeth’s womb when Mary ‎comes to visit her cousin, Cardinal Parolin said in many ways this joy was expressed by East Timorese ‎when the Gospel arrived there five hundred years ago.  The prelate said it is now their turn continue this work of ‎evangelization through faith and action.  First of all, they must be convinced of their faith through a ‎sustained and personal relationship with Christ, whom they received at Baptism. They must ‎make him the centre of their lives, as He has the words of eternal life and in their union with the Church ‎founded by Christ can they find that ‎lasting joy.‎ Secondly, Jesus does require of them a moral ‎behaviour that rejects all ‎selfishness and misuse of other people, a commitment to act in such a way ‎that ‎others will recognize us as his disciples.  Then as disciples they must be a community that goes forth to ‎bring the ‎mercy of God to all people.‎  Citing Pope Francis, he said, as Church  ‎we must “go out to ‎others, seek those who have fallen away, stand at the crossroads and welcome the ‎outcast” … we must ‎‎“get involved by word and deed in people’s daily lives” … we must be ‎‎“supportive, standing by people ‎at every step of the way, no matter how difficult this may prove to be” ‎‎… and always we must be ‎‎“filled with joy, knowing how to rejoice always‎.