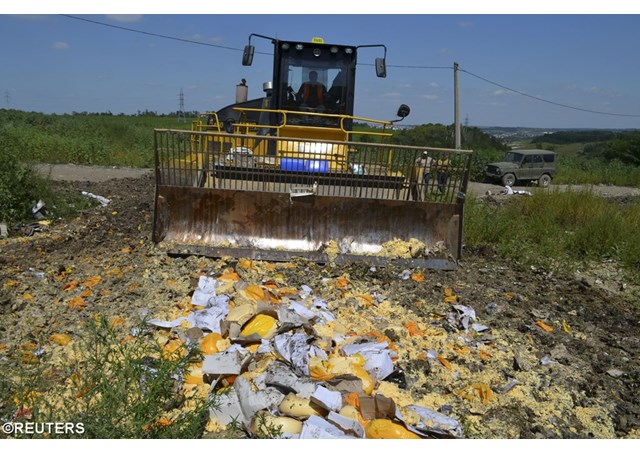 (Vatican Radio) Russian President Vladimir Putin has ordered the destruction of Western-produced foodstuffs imported in violation of sanctions despite a public outcry amid rising poverty.

A huge pile of Western-produced cheese was destroyed in front of television camera's Thursday, with one man proudly showing one of the cheeses that were apparently illegally imported.

Russian authorities have also steamrollered fruit and burnt a huge pile of bacon, while also destroying tonnes of other products have been destroyed.

The actions come a year after Russia banned some Western food products in retaliation to EU and US sanctions applied after Moscow annexed Crimea.

Analysts say President Putin’s order to destroy the food underlines the Kremlin’s determination to enforce the ban amid continuing tensions with Europe and the U.S. over the Ukrainian crisis.

Yet, the destruction has caused an outcry from anti-poverty campaigners who say it should have been given to the poor. Nearly 300,000 people have already signed an online petition urging President Putin to give the food away.

The petition says that food sanctions have led to higher prices and shortages that are causing real hardship as food price inflation is running at around 20 percent.

Religious leaders have expressed outrage too, with one calling the actions "insane, stupid and vile".

Some critics recalled that Russia saw notorious famines in its recent history which saw millions starve.

Former prime minister, Mikhail Kasyanov, said that 20 million Russian citizens were below the poverty line, sarcastically saying that destroying food products was "some real triumph of humanism". Experts say it will take years before Russia is able to provide food to all its citizens on its own.

The European Union is providing aid for European exporters of dairy produce, fruit and vegetables to ease the impact of the Russian ban on those goods, amid ongoing protests by French and Belgian farmers who want higher prices for their produce to stay in business.