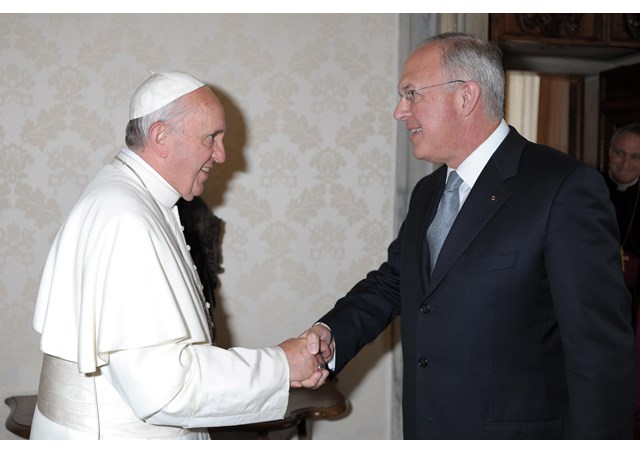 (Vatican Radio) Pope Francis has sent his good wishes to the Knights of Columbus who are currently holding their the 133rd Supreme Convention in Philadelphia, Pennsylvania. In a message signed by Vatican Secretary of State, Cardinal Pietro Parolin and addressed to the Supreme Knight of the Knights of Columbus, Carl Anderson, Pope Francis assured his closeness in prayer to all the participants who are looking at the theme “Endowed by their Creator with Life and Liberty”.

Below find the message addressed to the Supreme Knight of the Knights of Columbus, Carl Anderson and signed by Vatican Secretary of State, Cardinal Pietro Parolin

His Holiness Pope Francis has been informed that from 4 to 6 August 2015, the 133rd Supreme Convention of the Knights of Columbus will be held in Philadelphia, Pennsylvania.  He has asked me to convey his warm good wishes to all present, together with the assurance of his closeness in prayer.

As he prepares to visit Philadelphia next month for the Eighth World Meeting of Families, the Holy Father expresses deep appreciation for the steadfast public witness which your Order has borne to our Christian understanding of marriage and the family.  Elevated by the Savior to the dignity of a sacrament, marriage is, in the Creator’s plan, a natural institution, a life-long covenant of love and fidelity between a man and a woman, directed to their perfection and sanctification, and to the future of our human family.  Today, when the institution of marriage is under attack from powerful cultural forces, the faithful are called to bear witness to this basic truth of biblical faith and natural law, which is essential to the wise and just ordering of society.  In meeting the moral, social and political challenges of the present hour, great wisdom and perseverance will be required of them – “the patience of the saints, who keep the commandments of God and hold fast to their faith in Jesus” (Rev 14:12).

For this reason, His Holiness trusts that the theme of this year’s Supreme Convention – Endowed by their Creator with Life and Liberty – will draw attention to the duty of American Catholics, precisely as responsible citizens, to contribute to the reasoned defense of those freedoms on which their nation was founded.  The cornerstone of these is religious freedom, understood not simply as the liberty to worship as one chooses, but also, for individuals and institutions, to speak and act in accordance with the dictates of their conscience.  To the extent that this right is menaced, whether by invasive public policies, or by the growing influence of a culture which sets alleged personal rights above the common good, there is need for a mobilization of consciences on the part of all those citizens who, regardless of party or creed, are concerned for the overall welfare of society.  It is the Holy Father’s hope  that  the  program of catechesis and prayer which the Knights have inaugurated in view of the forthcoming Synod on the Family and the World Meeting of Families will contribute significantly to this prophetic witness.

The protection of religious freedom must also engage the consciences of believers on the global level, in response to the attacks unleashed on minority communities, most often Christian, in various parts of our world.  His Holiness is profoundly grateful for the efforts of the Knights to raise public attention to this grave humanitarian tragedy.  He is likewise grateful for the practical solidarity shown to suffering individuals and families through the recently established Christian Refugee Relief Fund.  He appeals once more to your Order for constant prayer, in families, parishes and the local Councils, for these, our beleaguered brothers and sisters, who strive only to be faithful to Christ.  It is urgent that, from Catholics throughout the world, an unceasing sacrifice of prayer be offered for the conversion of hearts, an end to fanatical violence and intolerance, and a general recognition of those fundamental human rights which are not granted by the state, but from the hand of the Creator, whom all believers invoke as a God of peace.

Finally, the Holy Father has asked me to express his appreciation for the outstanding charitable, educational and spiritual activities with which the Knights of Columbus contribute to the Church’s mission, and to his own ministry as the Successor of Peter, charged with solicitude for all the Churches.

Commending the deliberations of the Supreme Convention to the intercession of Mary, Seat of Wisdom, the Holy Father assures all the Knights and their families of a special remembrance in his prayers.  With great affection he imparts his Apostolic Blessing as a pledge of strength and peace in the Lord.