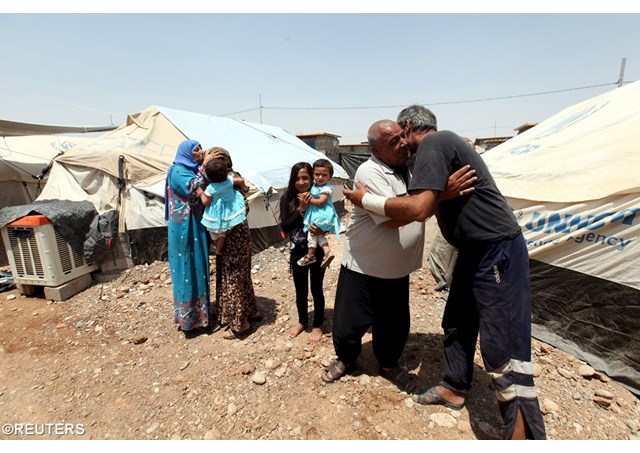 (Vatican Radio)  The Chaldean Patriarch of Baghdad, Louis Sako, says he is personally “very worried” about his nation’s future and warns that the so-called Islamic State, ISIS, "is growing” in strength and influence each day and nowadays the militant group is “like a real state.”

In a recent gesture of solidarity, the Iraqi Patriarch donated food and medical supplies to displaced Muslims living in a refugee camp near the city of Ramadi. Accompanied by other members of the Church and representatives of Caritas Iraq, Patriarch Sako personally brought the relief supplies to 250 Muslim families living in the refugee camp. His action came during the recent Muslim feast of Eid al Fitr marking the end of the holy month of Ramadan. Patriarch Sako spoke to Susy Hodges about his visit to the Muslim refugees and his views about Iraq’s future.

Listen to the interview with Patriarch Sako:

The displaced Iraqi Muslim families are currently being housed in tents in the desert near the city of Ramadi in very “critical conditions” said Patriarch Sako. He described their visit by car to the refugees to bring them food and other relief supplies as “a sign of solidarity” to show them that as a Church they are reaching out to all Iraqis in need, regardless of their religion.  He told the refugees, “we are close to you, we understand your suffering.”  Patriarch Sako described the gratitude of the refugees who begged them “not to forget them.” He said their situation was “a tragedy” with their plight going largely unnoticed because of the nation’s conflicts.

Asked for his views on Iraq’s future, Patriarch Sako said he was personally "very worried" given the ongoing conflicts in Iraq and elsewhere although he said there are “some signs of hope.” He said there was an urgent need for the Muslim nations in the region to resolve the sectarian conflict between Sunnis and Shiites. The Patriarch also called for serious action to be taken against ISIS (the so-called Islamic State) and other fundamentalist groups.  He said ISIS “is growing” with each day that passes and that nowadays the militant group is “like a real state.”