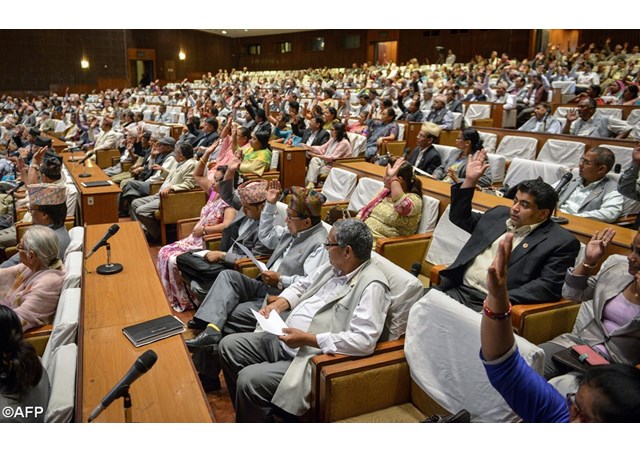 (Vatican Radio) The Vicariate of Nepal has presented a memorandum to major parties in the ruling coalition on 12 July urging that the word “secular” should be inserted in the preamble to ensure full religious freedom and demanded Christianity be recognised as a religion.

In 2008, Nepal’s lawmakers voted to end a 240-year old monarchy and become a republic, but politicians could not settle political differences over how to divide the country and address grievances of ethnic and marginalized groups, until two deadly earthquakes in April and May propelled them into finally finishing the post-war charter

Lawmakers of the quake-devastated country are giving the final touches to the draft of the constitution expected to settle a long-running political dispute in Nepal, which emerged from a 10-year Maoist insurgency in 2006.

The memorandum submitted by the Vicariate of Nepal also demanded change to the “dangerous” clause 3 under Article 31 that deals with religious freedom. While clause 1 upholds individual freedom of religion as a fundamental right, clause 2 ushers in a “right to abandon religion”. But clause 3 bans proselytising or conversion by clerics.

Fr Silas Bogati, the Vicar General, after he presented the memorandum told The Tablet that Clause 3 “practically takes away the freedom brought in by Clause 1”. The third clause could be used against clergy and Church with “wild allegations of conversion”, he said.

Since the weekend, government officials and legislators from the 600-member Constituent Assembly have fanned out to far corners of Nepal with 200,000 copies of the draft constitution to gather people’s recommendations over the next fortnight.

Lokmani Dhakal, one of the four Christians in Nepal's 601-member Constituent Assembly, reiterated the same concerns when he addressed a gathering of 60 Christian leaders at an ecumenical conference in Kathmandu on 6 July. "Without freedom to speak about one's faith, what is the meaning of religious freedom?" asked Mr Dhakal.

Nepal's religious minorities have however been concerned that their interests might be sidelined in the suddenly rushed process.

“We want secularism to be institutionalized in such a way that it is an unchangeable provision in the new constitution. We want the constitution to ensure religious rights and form a religious commission,” said C. B. Gahatraj, General Secretary of the National Federation of Christians.

Meanwhile, Muslim leaders too have raised serious objections and have protested a draft of a long-delayed republican constitution for failing to honor pledges made by previous governments to protect their rights.

Mohna Ansari, a commissioner and spokesperson of the National Human Rights Commission, echoed the Christian leader saying the provision of secularism must be included in the preamble of the constitution.

“This will send a message to the religious minority Muslim community that we are safe. This will also ensure that the Nepali state is neutral as far as religion is concerned,” she said.

“Muslims should be entitled to proportional representation in all state institutions,” she said, pointing out the flaws in the draft which exempts the Election Commission and Women’s Commission from being inclusive.

Officially, there are at least a million Muslims in Nepal and 300,000 Christians, though Christian groups say the population could be as much as 2.5 million.

Meanwhile, Nepal's pro-Hindu Rastriya Prajatantra Party-Nepal, the fourth largest party in the parliament is demanding that the constitution declare Nepal a Hindu nation. The party's lawmakers have protested in parliament against the provision of secularism in the draft of the constitution.