Pope to prisoners: Help one another 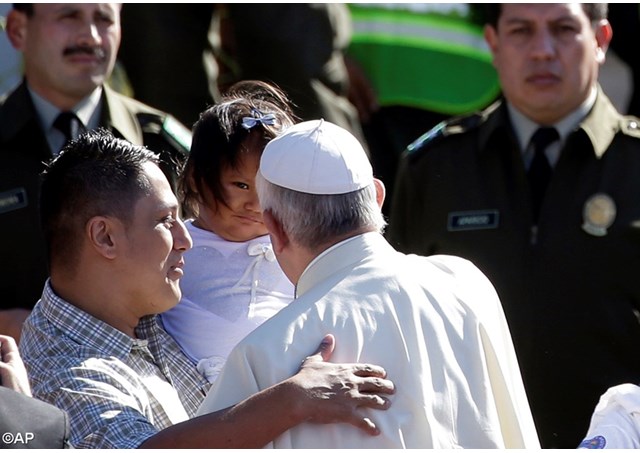 According to the United Nations High Commission on Human Rights, Bolivia has a total prison population of some 13,000 people who live in structures built to house less than half that number.

Add to that figure the over 2,000 young children who live in the prisons together with their detained parents and you understand why Pope Francis began his speech at the Santa Cruz-Palmasola Rehabilitation Centre by saying “I could not leave Bolivia without first seeing you”.

The Pope struck a personal note from the start when he suggested the prisoners might be asking themselves: “Who is this man standing before us?”…”A man who has experienced forgiveness”, he replied, “a man who was, and is, saved from his many sins. That is who I am”.

Pope Francis then made it clear he understands the pain and suffering of incarceration. He even listed some of them: overcrowding, injustice, violence… But he also emphasized hope, courage and the importance of prayer. “Being imprisoned, shut in, is not the same as being shut out”, he said. “Detention is part of a process of reintegration into society”.

He went on to give practical examples of how, in a rehabilitation centre like that of Palmasola, “the way you live together depends to some extent on yourselves”. The Pope urged his listeners to help one another: “the devil”, he said, “is always looking for rivalry, division, gangs. Keep working to make progress”.

Finally, before imparting his apostolic blessing on the prisoners, their families and on the judicial authorities present, Pope Francis asked everyone for their prayers: “because I too have made my mistakes”, he confessed, “and I too must make amends”.