Cardinal Turkson to World Meeting of Social Movements in Bolivia 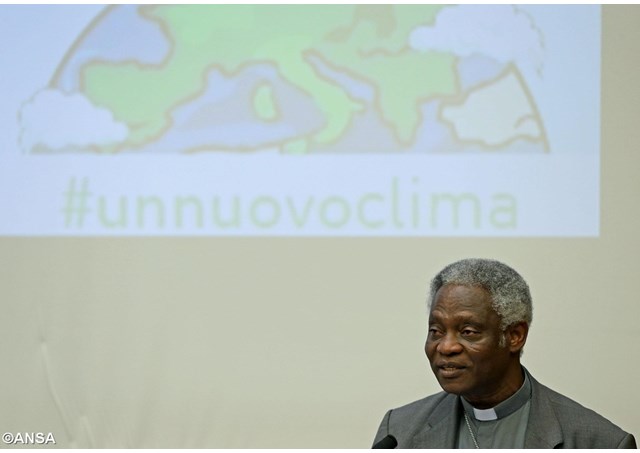 (Vatican Radio)  Cardinal Peter Turkson, President of the Pontifical Council for Justice and Peace, is participating in the Second World Meeting of Social Movements in Bolivia and spoke to the delegates on Tuesday.

Pope Francis is set to take part in the event on July 9 during his Apostolic Visit to Bolivia.  More than 1,500 delegates from Latin America and other continents, as well as many bishops and pastoral workers, are due to participate in the event organized to promote collaboration between popular organizations and local Churches in the Latin American region.

In his July 7th address to delegates, Cardinal Turkson offered several points on which participants could ponder in their deliberations.

In the first place, he urged the world to ‘move forward in a process of change in defence of the Earth and of human dignity’, a task to be advanced by religious leaders, businesspeople, and politicians in favour of the poor.

Those same poor and marginalized have organized themselves into social movements to resist social exclusion and ‘scandalous inequality’ by ‘resolving these access problems with their own hands’, he said.  ‘The Church’, he continues, ‘desires to join her hands with theirs in these processes’ and to promote ‘better conditions for integral development of the excluded as people, families, and towns’.

‘The poor, peasants, and indigenous peoples’, he continued, ‘have their own way of doing politics’, which are ‘different from dominant forms and often not understood by the parameters of Western rational processes’.  The Church, however, he said, ‘recognizes, valorises, and promotes these popular forms of expression’.

Cardinal Turkson went on to address the way in which social movements contrast with the global mentality of consumerism and colonialism.  Instead of promoting waste and technocratic ideology, popular movements seek ‘community forms of work organization, land, and housing’, he said.  These are new forms of life which the Church seeks to promote for the ‘dignity of the person over and above unbridled consumerism’.  Above all, ‘social movements desire peace’, he said.

Concluding his remarks, Cardinal Turkson expressed his wish that the Second World Meeting of Social Movements be a hallmark in the dialogue between grassroots movements and the universal Church by recalling the words of Pope Francis’ recent Encyclical, Laudato si’: On the Care of our Common Home.  ‘We are faced not with two separate crises, one environmental and the other social, but rather with one complex crisis which is both social and environmental. Strategies for a solution demand an integrated approach to combating poverty, restoring dignity to the excluded, and at the same time protecting nature.’  (LS 139)