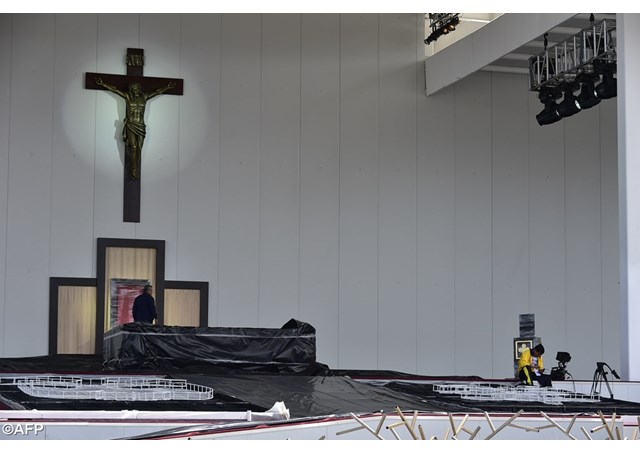 (Vatican Radio) Pope Francis is en route to Ecuador, the first stage of a three-country tour in Latin America that will also see him in Bolivia and Paraguay – three “sister nations” as the Holy Father described them in the video message broadcast in the three countries simultaneously ahead of the visit. The Holy Father’s flight departed Rome’s Leonardo da Vinci airport (Fiumicino) shortly after 9:30 AM Rome Time on Sunday morning, and is scheduled to last 13 hours.

Two years have passed since the Pope’s trip to Rio de Janeiro for World Youth Day in 2013. Now, Pope Francis returns to South America for his 9th international voyage. “I want to be a witness to the joy of the Gospel,” said the Holy Father ahead of his departure, expressing the desire to bring the tenderness of God to those most in need of it: children, the elderly, the sick, prisoners, the poor, indeed every victim of this “throw-away culture.”

The itinerary includes more than 24 thousand kilometers of travel over the course of the week, along with radical changes in  altitude and temperature as well: in just seven days Pope Francis will experience temperatures ranging from 3°  to 40° Centigrade, and altitudes from sea level to over 4 thousand meters, as he travels from the Atlantic to the Andes and in between.

Pope Francis is to spend 48 hours in each country, with each individual leg of the journey including events such as an audience with each President, a “sit-down” with the bishops, an encounter with civil society representatives, and a meeting with men and women religious.

Each country also has scheduled special events and visits: to a home for the aged run by the Sisters of Mother Teresa in Ecuador; a prison (one of the largest in Latin America) and a meeting with members of the World Meeting of Popular Movements in Bolivia; a children’s hospital and a slum area in Paraguay.

There is a Marian key to the voyage, as well: Pope Francis is to pray before the “Virgen Dolorosa” in Quito and before another major shrine to Our Lady 40 km from Asuncion.

Underlying all, however, is the twofold theme of the joy of the Gospel, and reconciliation and renewal.