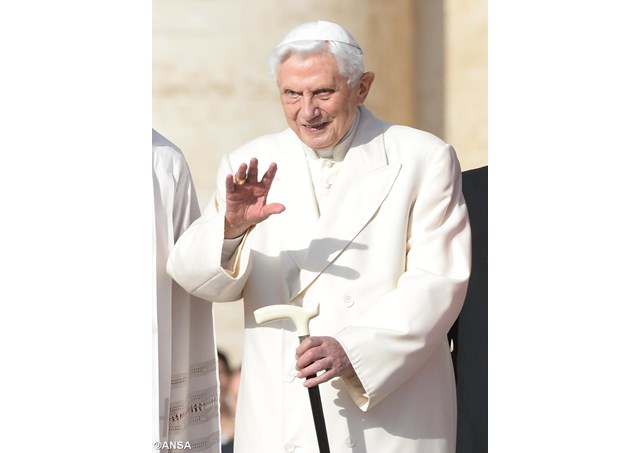 (Vatican Radio) Pope-emeritus Benedict XVI received Doctorates honoris causa on Saturday from the Pontifical John Paul II University of Krakow and the Krakow Academy of Music. The motivation for the honors issued by the University’s Academic Senate specifies five contributions Pope Benedict has made to knowledge and culture: his great respect for the musical tradition of the Church and remarkable sensitivity to the music of faith; the life-long and constant demonstration of a special concern for the noble beauty of sacred music and its proper place in the celebration of the sacred liturgical rites of the Church; his constant insistence on the didactic importance of the via pulchritudinis – the way of beauty – which can become a way of knowing and worshiping God for the modern man; his lifelong commitment to Truth, which strengthens the Christian faith in times of spiritual confusion caused by liberalism, postmodernism and relativism, and his tireless efforts to restore the spiritual dimension of Europe; his kind support for the work of transforming the schools of the Pontifical Academy of Theology into the Pontifical John Paul II University.

In remarks prepared for the occasion, and delivered on July 4th at Castel Gandolfo, Pope-emeritus Benedict XVI said, “In the Constitution on the Liturgy of the II Vatican Council, [Sacrosanctum Concilium], it is very clearly written: ‘The treasure of sacred music is to be preserved and fostered with great care. (114)’ On the other hand, the text highlights the actuosa participatio of the faithful in the sacred action as a fundamental liturgical category. Those two things, which in the text of the Constitution remain together and at peace with each other, were in the implementation of the Council, often in a relationship of dramatic tension. Significant areas of the Liturgical Movement believed that, in the future, there would be room for the great choral works and even for orchestral Masses only in concert halls, not in the liturgy. [In the liturgy], there could be space only for the singing and common prayer of the faithful. On the other hand, there was shock at the cultural impoverishment of the Church that would necessarily result from this. How to reconcile the two? How to implement the Council in its entirety? These were the questions that were particularly striking to me and to many other believers, to simple people, no less than to persons in possession of a theological education.”

The Pope-emeritus went on to say, “At this point, it is perhaps fitting that we ask the deeper question: what is music really? Whence does it come and toward what does it tend?” He posited three loci from which music arises: the experience of love; the experience of sorrow, of being touched by death, by pain, and by the abysses of existence; the encounter with the divine, who from the beginning is part of that which defines man.

“We do not know what will be the future of sacred music,” concluded Pope-emeritus Benedict XVI, “but one thing is clear: wherever the encounter with the Living God, who in Christ comes close to us really occurs, there is born anew and there again grows the answer, the beauty of which arises out of truth itself.”