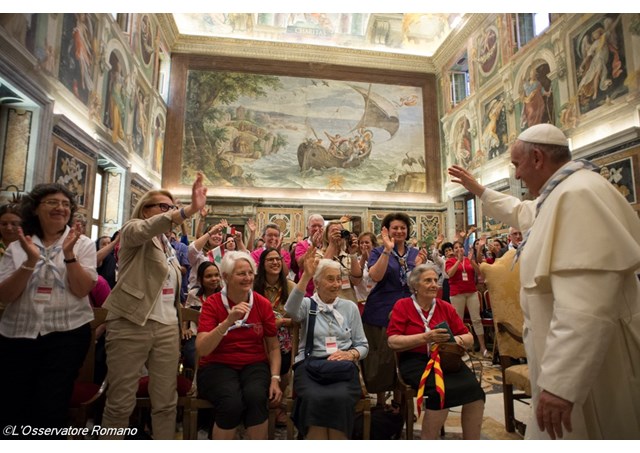 (Vatican Radio) Pope Francis received a group of some 230 participants for the World Meeting of the International Conference of Catholic Guiding on Friday. The Guides are in Rome from June 25th-30th, to explore the theme of living the joy of the Gospel as a Guide.

The international umbrella group for Catholic Girl Guides and Girl Scouts, ICCG, officially came into existence on the Feast of the Epiphany, 1965, in Rome, when twenty-one Girl Guide associations established the International Catholic Conference of Guiding, signing its Charter, its Statutes and approving its Internal Rules.

In remarks prepared for the occasion and delivered to the group in the Clementine Hall of the Apostolic Palace at the Vatican, Pope Francis thanked the Guides for choosing a theme rooted in and responding to his Apostolic exhortation, Evangelii gaudium, and praised the program of the Meeting. “It is a wonderful program,” he said. To proclaim to others, through the witness of our lives, that encountering Jesus makes us happy; that meeting Jesus frees us and heals us; that meeting Jesus opens us to others and encourages us to proclaim this especially to the poorest among us, to those who are farthest away, most lonely and abandoned.”

The Holy Father went on to encourage the participants in their work of recovering, nurturing and furthering the authentic vision of womanhood, in the Church and in the world. “Today it is very important that womanhood be properly appreciated,” he said. “Here, too,” he continued, “the role of educational associations like yours – that serve girls particularly – is absolutely crucial for the future.” In a world in which ideologies contrary to the nature and God’s plan for marriage and family, Pope Francis said, “It is therefore necessary to educate girls not only to the beauty and grandeur of their vocation as women, in a fair and differentiated relationship between man and woman, but also to take on important responsibilities in the Church and in society.” The Holy Father said that, in places  where women are still in a position of inferiority, and even exploited and abused, Guides are certainly called to play a major role in the promotion and education of women.

Pope Francis concluded with an appeal to the Guides, calling on them to remain open to the chance that God might be calling them to religious life. “I ask you also not to forget the necessary and explicit openness of your pedagogy to the possibility of a life consecrated to the Lord, of which the movement of the Guides has been so fruitful in its history.”