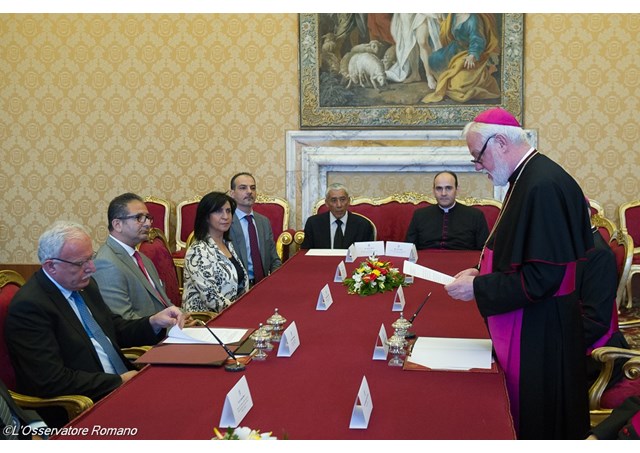 (Vatican Radio)  The Holy See signed on Friday a Comprehensive Agreement with the State of Palestine, which deals with essential aspects of the life and activity of the Catholic Church in Palestine.

The formal signing of the Agreement has been years in the making, following the Basic Agreement signed on 15 February 2000.

Archbishop Paul Richard Gallagher, Secretary for Relations with States for the Vatican City State, addressed the Palestinian delegation, represented by Doctor Riad Malki, Minister of Foreign Affairs of the State of Palestine, at the Signing Ceremony.

Below is Archbishop Gallagher's address:

Secretary for Relations with States

Signing Ceremony for the Comprehensive Agreement

between the Holy See and the State of Palestine

I would like, first and foremost, to welcome you and your Delegation to the Secretariat of State, on the auspicious occasion of the signing of the Comprehensive Agreement between the Holy See and the State of Palestine, which marks an important step on the path of good relations which for some time have happily existed between the Parties.

This present Agreement follows on from the Basic Agreement between the Holy See and the Palestinian Liberation Organization (PLO), which was signed on 15 February 2000. It is the result of the negotiations of a special Bilateral Commission which has worked at various levels over recent years, with dedication and competence, in a most cordial atmosphere.

In contrast with the earlier Agreement, the present one is being signed by the Holy See and the State of Palestine; this is indicative of the progress made by the Palestinian Authority in recent years, and above all of the level of international support, which culminated in the Resolution of the General Assembly of the United Nations of 29 November 2012, which recognized Palestine as a non-member Observer State at the United Nations.

In this context, it is my hope that the present Agreement may in some way be a stimulus to bringing a definitive end to the long-standing Israeli-Palestinian conflict, which continues to cause suffering for both Parties. I also hope that the much desired two-State solution may become a reality as soon as possible. The peace process can move forward only if it is directly negotiated between the Parties, with the support of the international community. This certainly requires courageous decisions, but it will also offer a major contribution to peace and stability in the region.

The Comprehensive Agreement, while constituting an understanding between two subjects of international law, basically concerns the life and activity of the Church in Palestine. In this respect, I am pleased that juridical recognition is clearly established and that guarantees have been given for the work of the Catholic Church and her institutions. Catholics do not seek any privilege other than continued cooperation with their fellow-citizens for the good of society. I am also pleased to say that the local Church, which has been actively involved in the negotiations, is satisfied with the goal attained and is happy to see the strengthening of its good relations with the civil Authorities.

In the complex reality of the Middle East, where in some countries Christians have even suffered persecution, this Agreement offers a good example of dialogue and cooperation, and I earnestly hope that this may serve as a model for other Arab and Muslim majority countries. With this in mind, I would like to emphasize the importance of the chapter dedicated to freedom of religion and freedom of conscience.

To conclude, may I once again reaffirm the Holy See’s particular solicitude for the Middle East and for the Holy Land, and its joy at the Agreement that has been reached, which I am hopeful will take effect without delay. Thank you!