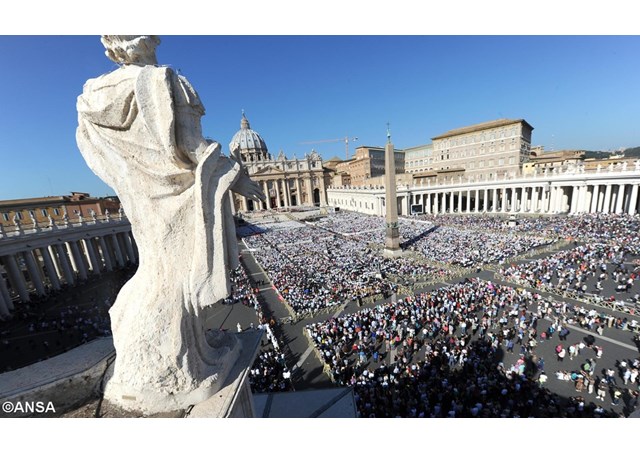 (Vatican Radio)  The challenges, the vocation and the mission of the family are the key themes or guidelines contained in the Working Document (Instrumentum Laboris) for the upcoming Synod on the Family that was released on Tuesday (June 23rd). The Instrumentum Laboris contains the full text of the Final Document  (Relatio Synodi) of the previous Synod on the Family held in 2014 as well as a summary of the replies to a questionnaire that that was sent to all the Catholic Bishops’ Conferences and other Church organisations around the world.

At a press conference in the Vatican, the Secretary General of the Synod of Bishops Cardinal Lorenzo Baldisseri, noted that Pope Francis had urged the participants at the conclusion of the previous Synod to reflect on the proposals and seek concrete solutions for the many difficulties and challenges facing families today.  He said this working document was the fruit of that work. It contains, said the Cardinal, not just the full text of the Final Document from last year’s Synod but also around 99 replies from Church organisations as well as 359 observations sent in by both clergy and individual lay Catholics including many families.

The theme for the upcoming Synod in October is “the vocation and the mission of thefamily in the Church and the contemporary world" and Cardinal Baldisseri said the working document is divided into three parts. The first is listening to the challenges facing the family, the second is discerning the family vocation and the third is the mission of the family today. He said the three parts include the addition of new topics pertaining to marriage and the family including issues such as falling birth rates, young people and their fear of getting married and the indissolubility of sacramental marriage as a gift and a duty.

The second speaker at the press conference, the Hungarian Cardinal Peter Erdo noted how one of the key challenges facing the family is caused by an exaggerated emphasis on individual rights in today’s society that makes many people reluctant to take on lasting commitments. He said other socio-economic challenges facing the family include poverty, low pay and lack of political support for the family as an institution.

When it comes to the issue of pastoral accompaniment, the third speaker at the news conference was Archbishop Bruno Forte, the Special Secretary of the Synod, who said it was the duty of the Christian community to help families grow and show God’s mercy towards wounded and fragile families. He said these include those who are separated, divorced, remarried, one parent families and unmarried couples living together. He also mentioned proposals on whether to introduce a penitential path for couples in these irregular situations.  Another hotly debated issue in last year’s synod was a proposal for streamlining the procedures relating to marriage annulment, mentioned by both Cardinal Baldisseri and Archbishop Forte.

At the end of the Synod in October it is expected that a final document will be produced and handed over to Pope Francis.