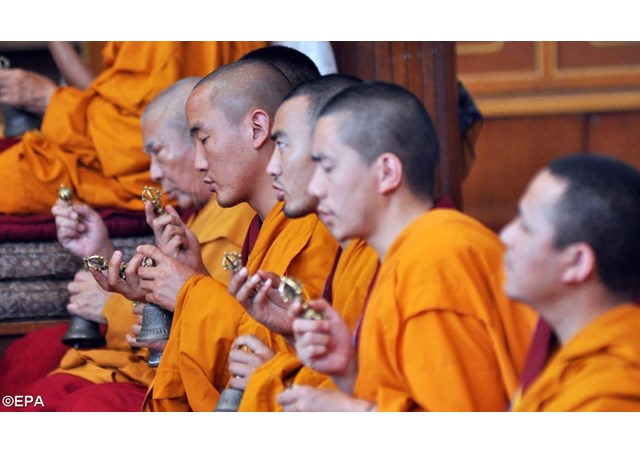 (Vatican Radio) Buddhists and Catholics from the United States are holding an interreligious dialogue meeting for the first time near Rome this week, focused on the themes of ‘Suffering, Liberation and Fraternity’. The five day meeting, which opened on Tuesday at the headquarters of the Focolare movement in Castelgandolfo, includes 46 Buddhist and Catholic participants from New York, Chicago, San Francisco, Los Angeles and Washington D.C.

In an opening address to the group, which will meet with Pope Francis on Wednesday, the president of the Pontifical Council for Interreligious Dialogue, Cardinal Jean-Louis Tauran said “in a world where diversity is seen as a threat”, the encounter is “a sign of our openness towards one another and our commitment to human fraternity”. “We are all pilgrims”, he stressed, adding that the dialogue between Buddhists and Catholics is part of “our ongoing quest to grasp the mystery of our lives and the ultimate Truth”.

To find out more about this dialogue, jointly sponsored by the PCID and the U.S. Bishops’ Committee for Ecumenical and Interreligious Affairs, Philippa Hitchen spoke to one of the Catholic participants, Fr Leo Lefebure, a theology professor at the Jesuit Georgetown University:

Fr Leo says the PCID asked the U.S. Conference of Catholic Bishops to begin a new series of conversations focused on the theme of ‘Be friends and help the world’ so the dialogue will explore beliefs and ideas that "resonate across both traditions", especially the concepts of ‘suffering and the end of suffering’.

Fr Leo notes that the basic values and virtues of Buddhists and Catholics “converge to a great degree” and there is a long history in the United States of leaders of both traditions coming together to oppose violence and work towards peaceful transformation of conflict.

Fr Leo says that every major urban area in the U.S. has large immigrant populations from Asia, so part of the Buddhist population is made up of these people. Another part includes people who have converted from other faiths, especially from Judaism and Christianity. What is sometimes controversial, he notes, is that some see themselves as ‘practitioners of both their religion of origin and some form of Buddhist tradition’.

But many Catholics, he says, find their faith much enhanced by practices such as meditation – in a survey of Christians in the U.S. who engage in some form of meditation, he says most found their own faith experience ‘profoundly deepened’ by these practices…

It is very significant, Fr Leo says, that this meeting is taking place in the year that we mark the 50th anniversary of Nostra Aetate, the document that for the first time described Buddhism and said the Catholic Church "rejects nothing of what is true and holy" in these traditions, “implying there are things we can learn from them”…..