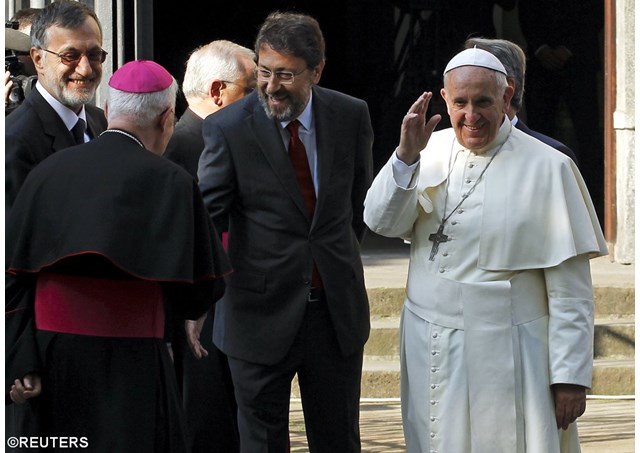 (Vatican Radio) On the second day of his Apostolic Visit, Pope Francis made an historic visit to the Waldensian temple in Turin. Although numbering only about 30,000 adherents, the Waldensian Evangelical Church is an important dialogue partner with the Catholic Church, as it is one of the only non-Catholic Christian communities native to Italy.

The early morning meeting marked the first time a Pope had visited a Waldensian house of worship.

Pope Francis began his speech to representatives of the Italian Waldensian community with a brief personal remembrance of his previous meetings with the friends of the Waldensian Evangelical Church of Rio del Plata, when he was Archbishop of Buenos Aires. The Pope spoke of his appreciation of the “spirituality and faith” of those meetings, from which he “learned many good things.”

The rediscovery of fraternity notwithstanding the differences: a communion on a journey

The Pope went on to speak about the fruits of the ecumenical movement in recent years. The principle fruit, he said, “is the rediscovery of the fraternity that unites all those who believe in Jesus Christ and are baptized in His Name.” This, he said, “allows us to grasp the profound ties that already unite us, despite our differences. It concerns a communion that is still on a journey, which, with prayer, with continual personal and communal conversion, and with the help of the theologians, we hope, trusting in the action of the Holy Spirit, can become full and visible communion in truth and charity.”

The Catholic Church seeks forgiveness for past sins against Waldensians

“But the unity that is the fruit of the Holy Spirit,” the Pope said, “does not mean uniformity. Brothers have in common the same origin, but they are not identical among themselves.” Unfortunately, he continued, historically this diversity was not accepted and was a cause of violence and disputes “committed in the name of the faith itself.” This history, the Pope said, can only grieve us, who pray for the grace “to recognize that we are all sinners and to know to forgive one another.” He then asked for forgiveness for “the non-Christian attitudes and behaviour” of the Catholic Church against Waldensians.

Pope Francis noted with satisfaction that today relations between Catholics and Waldensians are founded “on mutual respect and on fraternal charity,” as witnessed, for example, by the interconfessional translation of the Bible, pastoral arrangements for the celebration of mixed marriages, and the recent drafting of a joint appeal against violence against women, as well as other common initiatives.

These steps, the Pope said, are an encouragement to continue this common journey. One of the primary areas that is open to the possibility of collaboration between Waldensians and Catholics, he said, is evangelization. Another is “that of service to humanity which suffers, to the poor, the sick, the migrants.” The differences that continue to exist between Catholics and Waldensians on important anthropological and ethical questions, the Pope said, should not prevent us from finding ways to collaborate in these and other fields: “If we journey together,” he said, “the Lord will help us to live that communion that precedes every contrast.”