Pope: the human being is at the centre of development 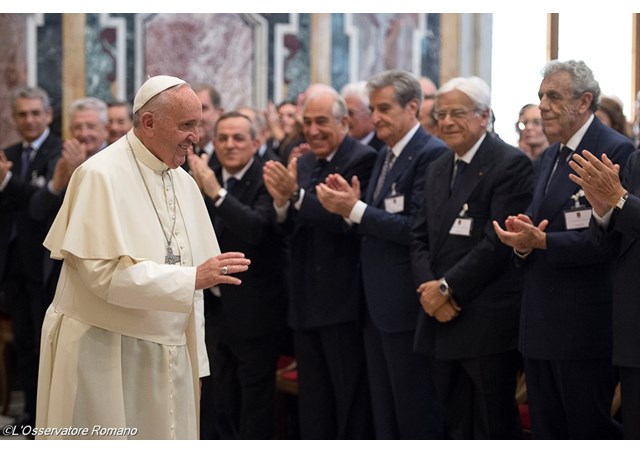 (Vatican Radio) Pope Francis on Saturday addressed members of the Italian National Federation of the Knights of Labour during an audience at the Vatican.

In his address, Pope Francis spoke of some of the economic issues we face in our time, singling out inequality and unemployment – especially among young people. Youth unemployment, he said, “is a true and proper social plague.” The world of labour should welcome young people and the contributions they can make, but instead seems to tell them they are not needed.

Continuing his analysis of contemporary social issues, the Holy Father said the common good cannot be advanced simply by achieving higher profits and greater production. “The social teaching of the Church continually recalls this fundamental criterion: that the human being is at the centre of development,” he said. “As long as men and women remain passive or marginalized, the common good cannot be considered fully achieved.” This, he said, is the social aspect of labour, which must involve people in a way that promotes interdependence, creativity, and commitment.

But, the Pope said, there is also an ethical dimension to labour. Authentic development must be rooted in justice and respect for the law, must avoid all forms of corruption, and must not neglect care for the environment. Justice, the Pope said, is not limited to refraining from iniquity or strict observance of the law – even if these are a necessary beginning. The just person will act conscientiously and with concern for the good of others, taking to heart the condition of the less fortunate and of the poorest among us. “The practice of justice, in this full sense, is what we hope for everyone who works in the economic field, and for all citizens.”