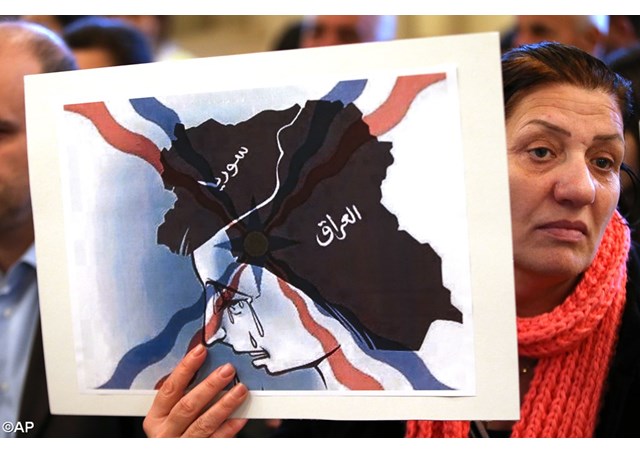 (Vatican Radio) Pope Francis said on Monday that  oil and weapons seem to weigh more on the scale of economic interests than the  lives of thousands of Christians in the Middle East, and while proclaiming peace and justice the world tolerates traffickers of death.

The Pope’s  words of condemnation were pronounced as he greeted participants of ROACO’s 88th Plenary Assembly in the Vatican.

The Assembly, scheduled to last until June 17, gathers representatives of aid projects of the “Reunion of Aid Agencies for the Oriental Churches” (ROACO).

It includes a special session dedicated to Syria with attention also given to Iraq in view of the recent tragic developments in that region.

In his address the Pope said the continuing conflict in the Middle East “make us feel the cold of a winter and a frost in the human heart that never seem to end”, and he remarked that “the land in these regions, crossed by the footsteps of those who seek refuge, is irrigated by the blood of so many men and women, including many Christians persecuted for their faith.

Pope Francis spoke with gratitude of the daily work and experience of the “sons and daughters of the Eastern Churches and their Pastors”, who share the suffering of the people and carry out the work of listening and service that is inscribed in the statute of the agencies coordinated by the Congregation for Eastern Churches.

He encouraged the delegates to continue in their humanitarian assistance with a Christian approach promoting people and nations with compassion and mercy.

“As I wrote in the Bull of Indiction of the Jubilee of Mercy – he said - 'Let us open our eyes and look at the misery in the world, at the wounds of so many brothers and sisters who are denied their dignity, and let us hear their cry for help’”.

“May their cry become ours and together we can break the barrier of indifference that often reigns concealing hypocrisy and selfishness" he said.

Looking back to the drama that has been unfolding in the past months, Pope Francis said it would appear that the world’s conscience has been jolted and it has opened its eyes to the fact that Christians have been present in the Middle East for millennia.

Thus - he said – there have been a series of initiatives to raise awareness and to reach out to those unjustly affected by the violence.

However – he continued – a further effort should be made to erase seemingly tacit agreements according to which “the lives of thousands and thousands of families - women, men, children, and elderly people – seem to weigh less than oil and weapons on the scale of  interests”.

“So that while proclaiming peace and justice, it is tolerated that traffickers of death continue to operate those lands” he said.

And with a heartfelt appeal, Pope Francis encouraged those present to “continue the service of Christian charity, to denounce all that tramples on human dignity”.

Pope Francis also noted that during the Assembly particular attention with be devoted to the situation in Ethiopia, Eritrea and Armenia (although the first two of this year became self-governing Churches).

He said ROACO can help these ancient Christian communities to feel part of the evangelizing mission, offering - especially to young people - a horizon of hope and growth.

Without this – the Pope said – it will be impossible to stop “the flow of migration that sees so many sons and daughters of the region set out to reach the Mediterranean coast, at the risk of life”.