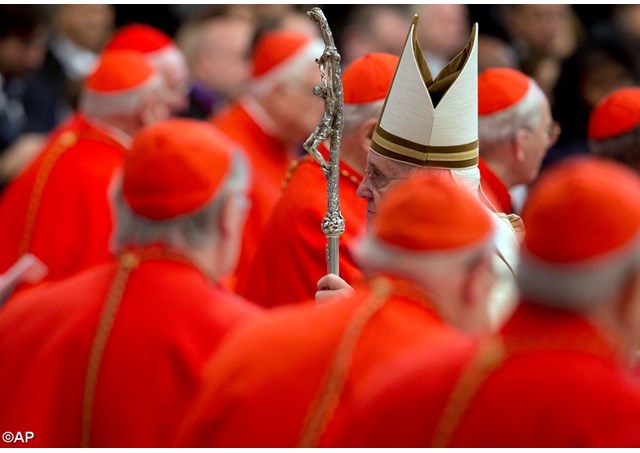 (Vatican Radio) Pope Francis’ and his ‘C9’ Council of cardinal advisors concluded a meeting at the Santa Marta residence on Wednesday, after discussing key changes regarding child protection, financial transparency and the reorganization of Vatican communications. The three day encounter was the tenth session since the Pope first announced the setting up of the new group one month after his election in 2013.

The primary task of the nine Church leaders from across the globe over the coming months is to offer advice on the crucial work of reforming the Roman Curia - an ambitious goal that has largely eluded popes of the past century who’ve attempted the same task.

Originally from Ferrara in northern Italy, church historian, author and professor Massimo Faggioli is director of the Institute for Catholicism and Citizenship at the University of St. Thomas in St. Paul- Minnesota in the United States. He’s currently researching the history of the Roman Curia and he spoke to Philippa Hitchen about the challenges facing Pope Francis as he seeks to guide and implement the reform of this ancient institution:

There is no one book on the history of the Roman Curia, Massimo says, so he’s currently working in the Vatican Library and Archives to try and reconstruct the history of the past ten centuries of an institution that is "the oldest functioning bureaucracy in the world"….

Almost every pope of the 20th century tried to reform the Roman Curia, he says, mentioning especially the changes of 1908, 1967 and 1988, yet he points out that none of these really change the fundamental structure laid down in 1588……the lesson is that these reforms have been limited, Massimo says, and they have been more rational than theological…..

The big difference between Francis and all his predecessors of the 20th century, he continues, is that he never studied or worked in Rome and that gives the current pope “more freedom and objectivity” to pursue his reform programme. Secondly, the conclave of 2013 took place “in one of the lowest moments in the reputation of the Roman Curia”…..so there is “a window of opportunity” as the Pope has been given a clear mandate for reform…

The key question, Professor Faggioli notes, is “do we want the central government of the Catholic Church to be inspired by political models or by theological ideas?” In the past, he says, the Curia has been structured on a political system, but in his December 2014 address to the Curia – famous for his description of the ’15 plagues’ afflicting its members – the Pope also “tries to structure the Roman Curia as a small Christian community” which is a very “bold plan”…..

When asked about resistance to reform, Massimo speaks of the “Dan Brown narrative” which sees the Roman Curia as a mythically powerful institution: “I don’t think anybody who knows these structures is convinced by that,” he says. There is always resistance to change, he adds, but “I wouldn’t overestimate that”….

Describing the main challenges, he says, with the first non-European pope in many centuries, “the Roman Curia must look more like the global Church and that is an epoch making change” that requires a lot of creativity, courage, experimentation…..