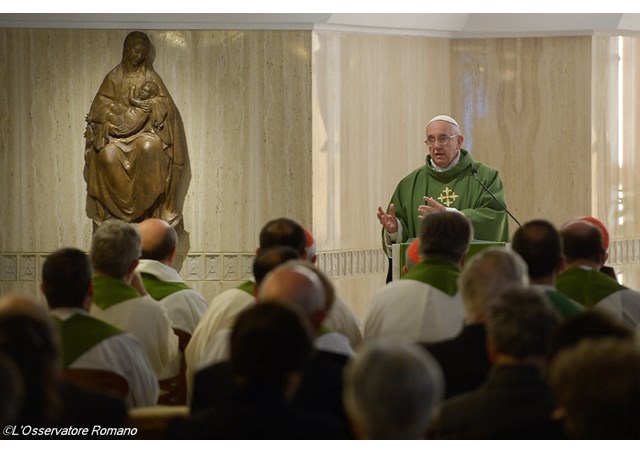 (Vatican Radio) Witnessing to the truth of our Christian identity, without watering it down or losing its flavour: that theme was at the heart of Pope Francis’ words during Mass at the Casa Santa Marta on Tuesday morning. Philippa Hitchen reports....

What exactly is our Christian identity? Pope Francis asked at the start of his homily, inviting his listeners to think of it as “a long journey” from ambiguity to a strong faith that we can bear witness to in our daily lives.

It is true that we are sinners, he said, and that we fall down, but with God’s strength we can get up again and continue our journey. “Sin is part of our identity”, he stressed, but we are sinners with faith in God “who has anointed us, put his seal upon us” and given us the Holy Spirit as a pledge in our hearts.

Christians, the Pope said, are not people who follow a particular philosophy, but rather those who remain faithful to this God-given identity as the anointed ones who let the Spirit into their hearts.

The beauty of this identity, he said, can be seen through the way we bear witness to the world. But he warned of several ways in which this witness can be weakened or watered down: firstly by moving from our concrete faith in Christ to a kind of insipid religion of just prayers and ideas, along the lines of the Gnostics in the ancient world. These “modern Gnostics”, Pope Francis said, are tempted to avoid the scandal of the Cross and are content to seek God through their “rather ethereal Christian spirituality”.

Secondly, the Pope went on, there are those who forget they have been anointed and given the guarantee of the Spirit, so they are always searching for some “novelty” in their Christian identity. They say “Where are the visionaries who can tell us exactly what message Our Lady will be sending at 4’o’clock this afternoon?”, he joked.

Finally, the Pope warned, there are those whose identity is weakened by moral and human “worldliness” and the desire to broaden the boundaries of their Christian conscience. They are like salt that loses its flavour, he said, yet throughout the history of Salvation, God has patiently led us from ambiguity to the concrete certainties of the Incarnation and of our Redemption through the death of his Son. “This is our identity”, the Pope said, and we must ask the Lord for the gift of grace to bear witness to this truth.