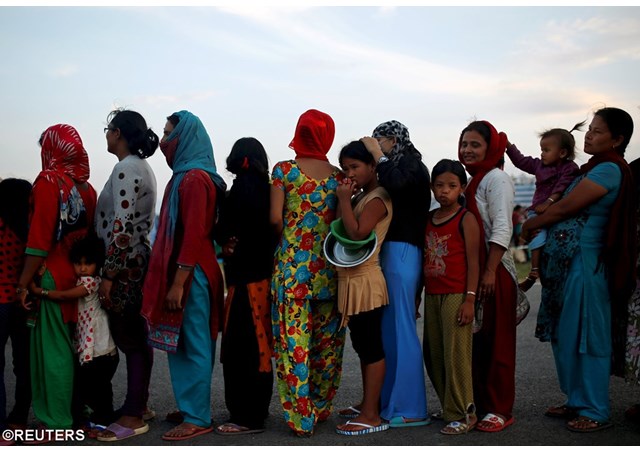 (Vatican Radio) Criminal gangs have been threatening development committee officials with death and attacking them in an attempt to take control of aid for victims of the recent earthquake in Nepal sent by the government of Kathmandu and the international community. Meanwhile a High level committee has reported that many victims, especially of the remote areas have failed to receive food and emergency supplies as a result of irregularities in the distribution of supplies.

Dozens of officials from the development Committees for villages in Nepal, denounced the aggression after arriving in the capital from rural towns to demand government protection and greater safety. Others are hiding in villages and fear for their lives, after being targeted by groups of criminals who exercise enormous pressure on them to falsify the amount of damage from the earthquake on 25 April - which caused more than 8,700 confirmed victims and destroyed most of the buildings, prisons and Hindu temples - and grab the surplus of resources allocated to the rescue operations.

A report of the High-level Administration Reform and Monitoring Committee has stated that many earthquake victims, especially those living in remote areas, have still not received food and emergency supplies as a result of irregularities in relief distribution.

According to the report prepared based on the field inspection of the earthquake-affected districts, relief materials have mostly reached those people who have connections with local politicians, while many victims living in remote areas have not received any help.

The committee, led by former Administrative Court Chairman Kashi Raj Dahal, has concluded that relief materials are being heavily misused in the absence of one-door distribution policy. Political meddling is rampant in relief distribution, so much so that some people with close ties with local politicians are collecting relief supplies on daily basis.

The officials from various village development are the local representatives of the government and are responsible for distributing all kinds of assistance. They must then report the results obtained locally.

On Sunday, the officials from the district of Sindhupalchowk [in the central region of Bagmati - ed] travelled to the capital. Prakash Chapagain, from the Sunkhani  committee[Nuwakot district, the central region of Bagmati - ed], told AsiaNews: "Life is the most important thing. If we do not feel safe we cannot work. Dozens of thugs attacked many of my friends. Some have attacked me to steal aid. When I opposed them, they tried to stab me but I ran away. "He reveals that criminals are trying to get rich by exploiting the tragedy of the earthquake and are telling the officials to distribute identity cards to "false homeowners and false people."

The government began distributing identity cards which provides each homeowner 15 thousand Nepalese rupees (about 130 euro) to facilitate the purchase of zinc plates useful for building temporary shelters. This initiative has led to the proliferation of "false survivors" who are chasing state aid. There have also been repeat registrants who have hindered the aid works. According to the District Committee for the management of disasters, 230 million rupees (more than two million euro) were already distributed for earthquake victims.

To pocket the government announced cash relief, even those people who did not suffer any loss in the earthquake have been found registering their names as the victims, says the report. Cases of joint families splitting to claim more cash relief are also common. Distribution of cash relief has become difficult since the number of quake-affected families has risen dramatically as compared to the latest census data.

In Nuwakot, for instance, more than 76,000 families have come forward claiming to be the earthquake victims, though the 2012 census had  put the number of families in the district at 59,000. Going by the figures, 17,000 new families cropped up in Nuwakot in three years. Because of this discrepancy, the local administration has been unable to distribute ID cards and cash relief to the victims.

Other quake-affected districts, including Dolakha, Sindhupalchok, Dhading and Rasuwa, are distributing the ID and cash relief regardless of the inconsistency.

Mahesh Baral, an official of the local office for the development in the district of Sindhupalchowk, laments the difficulties in the distribution of the documents because of the lack of cooperation of partners at a local level: "We have already sent 100 thousand cards to two municipalities and 59 committees throughout the district . It seems that the number of homeowners is now over 150 thousand units. " The 2011 census shows, however, the presence of 66,648 residents, only a third of those who have claimed aid in the aftermath of the quake.

Concerned by the irregularities taking place in relief distribution, the Home Ministry has instructed the district administration offices to investigate into the matter and take action against guilty. Such instruction was issued after the local administrations of the quake-hit districts reported that they were being pressured by local politicians to issue ID cards to all those registered as victims.

More than a month after the devastating earthquake which hit the country, the earthquake continues to affect the lives of the population, especially that of children, above all from the danger posed by human traffickers. After the partial reopening of the schools in late May, less than half of the children have returned for lessons in the most affected areas of the country.

Fr. Amrit Rai, principal at St. Xavier School in Jawalakhel [Jesuit high school in Lalitpur district - ed] reports that "all the Catholic schools are safe and we are able to ensure a peaceful educational environment. There is no need to worry. Parents can rest easy and send their children back to schools. "