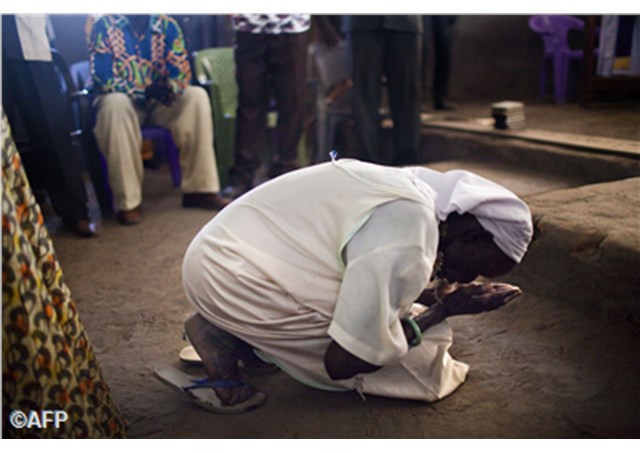 Notwithstanding failure by the warring factions of South Sudan to agree on a peace settlement, the Church continues to seek ways of bringing about peace and reconciliation to the devastating conflict in that country. Twenty five leaders and representatives from the member churches of the South Sudan Council of Churches have issued a statement from Kigali, Rwanda at the end of their retreat which started on 1st June and ended 7th June 2015.

In the statement, the Church leaders speak of lessons learned from Rwanda which emerged from genocide and has since made significant strides towards promoting peace and reconciliation among its people.

The Catholic Church is a member of the South Sudan Council of Churches.

The word of Yahweh was addressed to me as follows, 'Son of man, I have appointed you as watchman for the House of Israel. When you hear a word from my mouth, warn them from me. If I say to someone wicked, "You will die," and you do not warn this person; if you do not speak to warn someone wicked to renounce evil and so save his life, it is the wicked person who will die for the guilt, but I shall hold you responsible for that death. If, however, you do warn someone wicked who then fails to renounce wickedness and evil ways, the wicked person will die for the guilt, but you yourself will have saved your life'

We, twenty five leaders and representatives from the member churches of the South Sudan Council of Churches, gathered in Kigali, Rwanda for a retreat from 1st to 7th June 2015 along with lay members and partners, issue this solemn statement of our intent to achieve peace and reconciliation for our beloved nation. We speak with one voice as the united Church of South Sudan.

We have listened to the voices of our Rwandan brothers and sisters. We thank them for sharing with us, and we particularly thank the Church of Rwanda for welcoming us and offering to walk with us on this journey. We have seen how they developed their country after the genocide of 1994, and how they addressed the pain, anger and bitterness of those terrible events. We have visited their genocide memorials; such inhuman acts, whether in Rwanda or South Sudan, must never be forgotten; we must know, learn from and take responsibility for our history. We have learned many things from them: the need for reconciliation, forgiveness, humility, unity and leadership. We have seen how important forgiveness is: the person who does not forgive remains a prisoner of their own bitterness, and only he or she holds the key to that prison. To free another person is to free yourself; reconciliation must begin with yourself; only if you heal yourself can you hope to heal others. We have been challenged to examine ourselves, to question whether we have colluded in the conflict either by omission or commission, and to begin to transform ourselves. We confess and repent of our own wrongdoing. Forgiveness seems foolish in the world of politics and militarism, but for the Church of the Crucified Christ who, even as he was dying, said, “Father, forgive them; they do not know what they are doing” (Luke 23:34), forgiveness is the only way. In a world which correctly focuses on human rights, it is often forgotten that we can at times choose to sacrifice some of our rights for the common good. To choose forgiveness and sacrifice is to choose greatness. But forgiveness is not the same as impunity; accountability, particularly through restorative justice, can still be pursued. A heavy burden is upon all of us to create a positive future for our young people, for our children and for future generations.We came to Rwanda to learn because we must prevent such a terrible atrocity from happening in our own country: “Never again!”

Just as the Prophet Ezekiel was appointed watchman by the Lord, we too are appointed watchmen and women by divine authority. At the 2010 meeting between Church and Government in Juba (Kajiko 2), a South African bishop advised us that we could be like ‘watch dogs’ or ‘guide dogs’. A watch dog barks when there is trouble, but a guide dog leads you away from trouble in the first place. We have tried to be like guide dogs. We have consistently tried to help our nation to move in the right direction by offering guidance to our leaders. We spoke powerfully at the Nyakuron meeting in December 2013, urging the SPLM leadership to resolve their differences peacefully. After the current conflict began, we issued our first statement within 48 hours, on 17th December 2013. Since then the SSCC and member churches have issued numerous statements, culminating in the SSCC statement on 26th May

2015 and an ECSSS statement on 31st May 2015. All our guidance has been ignored. To fulfil the mandate given to us by the Lord, we must cease to be like ‘guide dogs’ and become like ‘watch dogs’. Not only will we warn our leaders and our people to renounce wickedness and evil ways, we will take action to bring peace and to begin reconciliation. All of this we do out of love, not anger. The leaders of this nation are our sons and daughters, our brothers and sisters, our parishioners and congregants; we are their pastors and shepherds.

The Church's Position on the War

We have repeatedly stated that this is a senseless war which must stop immediately. There is no moral justification to continue killing ourselves, regardless of any legitimate political issues with government or opposition. A cessation of hostilities must be implemented before any detailed negotiations for the future; it is unacceptable to negotiate posts and positions while people are killing and being killed. Negotiations are about to begin again while innocents continue to suffer. What will be different this time? The needs of the people must be met, not the needs of political and military elites. It appears that pride, power and politics have become a greater priority than peace.

As we analyse our conflict, we see many root causes. We see a power struggle between leaders surrounded by an immediate circle of advisors, aides, politicians, generals, hangers-on, and spoilers. We see ethnic communities following their leaders, while grassroots communities and armed youth are caught up in cycles of revenge killing. We see military commanders, each with their own agendas, not necessarily under the control of the principals. We see communities which have not yet taken sides in the conflict put under increasing pressure by a lack of effective governance, the failure of the rule of law, and by direct provocation from government or opposition forces.

We also see the terrible effects of the recent upsurge of fighting; a rapidly deteriorating economic situation leading to hardship for ordinary citizens; national assets destroyed; human rights abused at every level; people killed and tortured; women raped; children recruited into armed groups; looting; arrests for no reason; security organs acting as if they are above the law; a shrinking space for citizens and civil society to speak out; a deteriorating humanitarian situation; increasing militarisation of society; new armed groups springing up; and increased conflict between and within communities.

Much of the country is lawless, and so people take the law into their own hands. There is an increase in crime with no action taken, and people are afraid of the authorities who should protect them.

We acknowledge all the peace negotiations, whether in Addis Ababa or Arusha, and we hope that the steps taken to implement the Arusha agreement indicate a new commitment, but overall there appears to be little real progress. There is a complete lack of trust between the parties. They are not ready to make peace; both still see advantages to armed conflict. They talk about talks rather than talking about peace. There is no political will for peace. Furthermore, we believe that they have no idea how to make peace. They have no exit strategy; they are unable to find a face-saving compromise that will convince their followers they have gained something. If the two principals sign an agreement, there is no guarantee that their commanders and other followers will actually agree to implement it. People are completely polarised. The Church must play a significant role and the process must be owned by South Sudanese stakeholders.

The Church has historically played a significant role in peace making.

This includes the People to People Peace Process, the Entebbe Process which shadowed the IGAD negotiations in Naivasha, our paper ‘Let My People Choose’ which put the right to self-determination at the centre of the CPA, and our advocacy to bring about the referendum. We wish to inform our leaders, our people and the regional and international community that the Church is now taking serious steps to bring about a homegrown solution for peace and reconciliation.

Starting in South Sudan and reaching out to the region, the rest of Africa and beyond, we will embark on a process of advocacy. We appreciate the role of regional states and express our gratitude for their efforts to bring peace. However we are also aware of their own political, military and economic interests in South Sudan which might cause difficulties and suspicions; there are elements of a proxy war.

We will find ways to bring stakeholders together in a less politically charged atmosphere and to build bridges between them to overcome mistrust and disagreements. Any successes in this process will feed back into the IGAD negotiations.

Throughout our country, and amongst our people in the diaspora, we will call for prayer and fasting to change the hearts of ourselves, our leaders and our people. Only through forgiveness and reconciliation can we live as one nation, and only through God's help can we forgive and reconcile.

Message of Hope and Forgiveness

We ask forgiveness for anything we may have done to divide our nation, and for all the times we have failed to speak and act in love to heal our nation.

We bring you a message of hope. We have been inspired by the spirit of love and forgiveness we have seen in our brothers and sisters in Rwanda. Their testimonies have shown us that forgiveness is not just a theory, but that it actually works. The past does not need to control us any more!

In our struggle for liberation we had a strong spirit of unity; let us once again accept ourselves as one united people. The Grace and Power of God will prevail.

We love you, we bless you and we forgive you all.