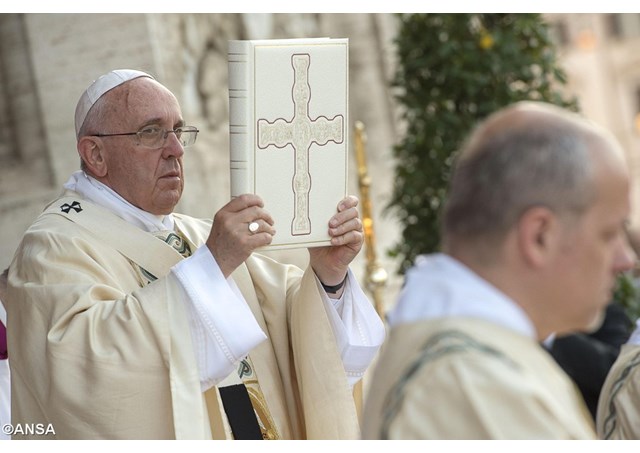 (Vatican Radio) Pope Francis on Friday greeted the General Chapter of the Priests of the Sacred Heart of Jesus also known as the Dehonians.  The Holy Father called to mind the importance of the General Chapter saying that it “constitutes a privileged moment for deepening and growth of your religious family” and expressed his wishes to the newly elected Superior General, Father Heiner Wilmer.  Pope Francis then greeted all the members of the religious order who work around the world and encouraged them “to continue with generous fidelity their apostolic commitment.”

The Holy Father continued “Therefore, as religious, you are called to be merciful. Which is first of all to live in profound communion with God in prayer; in the meditation on Sacred Scripture and in the celebration of the Eucharist, so that our whole life is a journey of growth in the mercy of God.”  The Pope then said “To the extent that we become aware of the gratuitousness of the Lord and welcome him in ourselves, then we ourselves grow in tenderness, understanding and kindness to the people around us.”

Pope Francis also encouraged the members of the order to focus on the current needs present in today’s world and called upon them to be open in mercy and “diligently present in the new Areopagus for evangelization, giving priority, even if this entails sacrifices, to an openness to the realities of extreme need that have proved to be a symptomatic disease of modern society.”

The Pope then closed by invoking the heavenly protection of the Virgin Mary and imparting the Apostolic Blessing to all members of the Dehonian family.