Pope: wealth that is not shared generates corruption 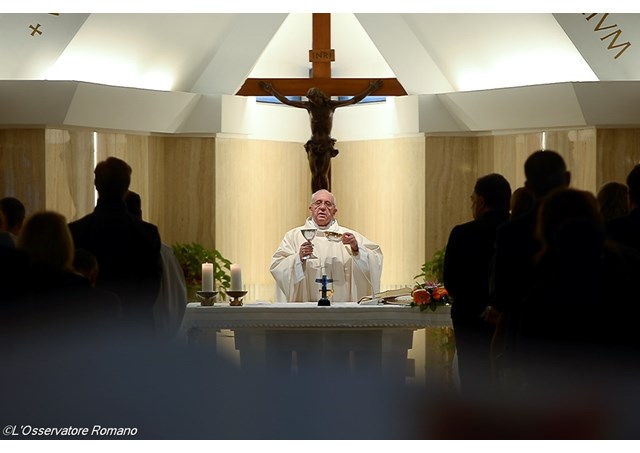 (Vatican Radio)  If you are wealthy, you should make sure your riches serve the "common good." An abundance of things lived selfishly is "sad", steals "hope," and is the origin "of all kinds of corruption," large or small. That was Pope Francis’ reflection in his Homily at this morning’s Mass celebrated in the chapel of the Casa Santa Marta.

In his Homily, Pope Francis reflects on one of the most famous passages of the Gospel: Jesus meets the rich young man who enthusiastically asks to follow Him and assures Him he will always live by the commandments.  But when Jesus tells him one last thing is needed - to sell his things, give everything to the poor and then follow Him - the young man’s attitude and willingness swiftly change. Suddenly, "the joy and hope" in the rich young man vanish, because he does not want to give up his riches.

"There is a mystery in the possession of wealth," says Francis. "Riches have the ability to seduce, to take us to a seduction and make us believe that we are in a paradise on earth." Instead, says the Pope, that earthly paradise is a place without "horizon", similar to that neighborhood the pontiff  remembers seeing in the seventies, inhabited by wealthy people who had built walls and fences to defend their property from thieves:

"And living without horizons is a sterile life; living without hope is a sad life. The attachment to wealth makes us sad and makes us sterile. I say 'attachment,' I am not saying 'good administration of one’s riches', because riches are for the common good, for everyone. And if the Lord gives them to one person it is so that they are used for the good of all, not for oneself, not so they are closed in one’s heart, which then becomes corrupt and sad."

Open your hand and your horizons

Wealth without generosity, insists Pope Francis, "makes us believe that we are powerful like God. And in the end it takes away the best: hope." But Jesus, he concludes, indicates in the Gospel the right way to live.

"The first Beatitude: 'Blessed are the poor in spirit,' or the stripping off of this attachment and making sure that the riches that the Lord has given one are for the common good. It’s the only way. Open your hand, open your heart, open up the horizon. But if you have a closed hand, your heart is closed as the man’s who threw banquets and wore expensive clothes;  you have no horizons, you do not see others who are in need and you'll end up like that man: far from God. "