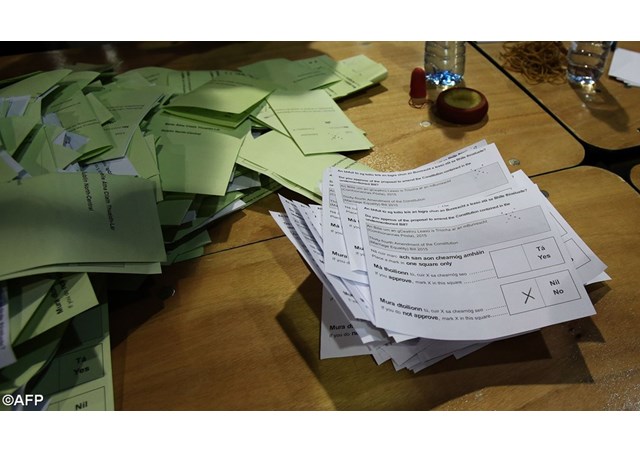 (Vatican Radio) Ireland has become the first country in the world to vote to create a constitutional right to so-called same-sex “marriage.”

Final votes are still being counted, but supporters of traditional marriage who opposed the change have already conceded defeat.

Opinion polls showed that support for the proposal was high amongst younger voters, and younger citizens turned out to vote in record numbers.

There is a considerable urban/rural divide in the vote with citizens in the capital, Dublin, and other large cities voting overwhelming to re-define marriage. Voters in rural areas were considerably less supportive. Overall, however, the trend is clear and the measure was carried comfortably.

David Quinn, who led the campaign for those opposed to re-defining marriage, was early to concede, offering his congratulations to the 'yes' side just an hour after the counting of votes got underway.

The health minister, Leo Varadkar, who recently came out as a gay man, described the result as a "social revolution".

It was always going to be an uphill struggle for those who spoke out against same-sex marriage. Every political party supported change and there was virtual unanimity amongst the media in pushing for a 'yes'. One eve-of-poll survey found that of the ten main newspapers, there were three times as many articles pushing a 'yes' vote as advocating a 'no' vote.

The country's Bishops had engaged in a relatively low-key campaign largely restricted to the reading of pastoral letters at Masses in parishes.

The Archbishop of Dublin, Diarmuid Martin, took to the airwaves pointing to the reasons why he was voting 'no', namely because of his belief that marriage is a unique institution involving one man and one woman.

Concerns have been expressed that the measure may affect religious freedom: the prime minister, Enda Kenny, has already said that Catholic schools will be required to teach same-sex marriage as part of the curriculum.

Campaigners also worry about the effects the 'yes' vote will have on children since it now confers an automatic right to procreate on same-sex couples leading to fears of an upsurge in demand for fertility treatment and surrogacy.

Referendums are a key feature in the Irish democratic process. A controversial parliamentary vote in the 1920s led to a bruising and divisive civil war that divided families and communities.

The drafters of the constitution were adamant that important decisions should be decided by the people and the people alone.