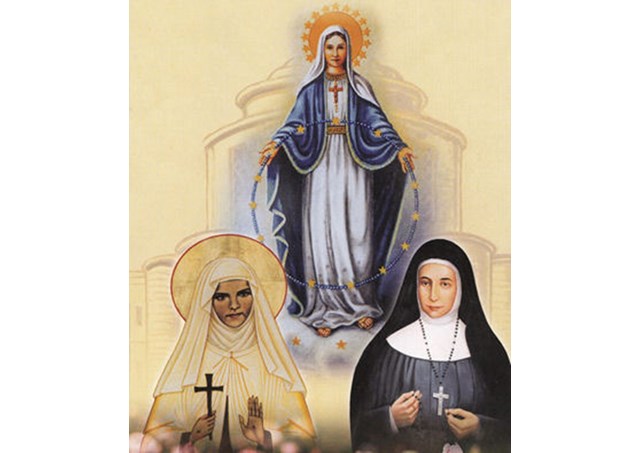 (Vatican Radio) A press briefing took place in the Press Office of the Holy See on Friday, to present some further information on the canonizations to take place this Sunday, of Blessed Mariam of Jesus Crucified Baouardy and Bl. Marie-Alphonsine Ghattas.

The Director of the Catholic Center for Studies and Media of Amman, Jordan, Fr. Rifat  Bader, was the main speaker at the briefing. He explained to journalists present that the event is truly Catholic and ecumenical, “A message of solidarity and encouragement to the Christians of the Holy Land,” he said.

Quoting the words of the Latin Patriarch of Jerusalem, His Beatitude Fouad Twal, Fr. Bader said, “The canonization of the two girls from the East during these dark times is an invitation from His Holiness Pope Francis to pray, knowing that only prayer can  miraculously help save our faith in the midst of these times of trial.” He added, “Now, we have two  new saints who represent a model of perfection for Christians, as well as for Muslims and Jews alike. They are both named Mary, and this name is widespread and commonly used among all three  traditions. It is a sign of our modern time which suggests that we can talk about the three religions  without any discrimination.”

Bl Mariam of Jesus Crucified Baouardy and Bl. Marie-Alphonsine Ghattas are to be canonized this Sunday, May 17th, during Mass in St. Peter’s Square, along with Bll. Jeanne-Emilie de Villeneuve and Maria Cristina of the Immaculate Conception Brando.

Please find the full text of the summary statement released by the organizers, below

New Hope for the sons and daughters of Palestine, Jordan and the Middle East: Pope Francis will announce next Sunday the canonization of four nuns. Two of them are  Palestinians, namely Marie-Alphonsine, founder of Palestine’s first congregation, the Sisters of the  Most Holy Rosary of Jerusalem, and Mariam of Jesus Crucified Baouardy, the founder of Carmelite Convents in Bethlehem and India. Two other women religious, one French and one Italian, are also being canonized. The Pontifical Mass will be celebrated at St. Peter’s Square in the Vatican by His Holiness Pope Francis, in the presence of Cardinals and Archbishops from the Vatican and around the world. In attendance will be Cardinal Angelo Amato, Prefect of the Congregation for the Causes of Saints; Cardinal Leonardo Sandri, Prefect of the Congregation for Eastern Churches; Cardinal João Braz de Aviz, Prefect of the Congregation for Institutes of Consecrated Life and Societies of Apostolic Life;  and Cardinal Jean-Louis Tauran, President of the Pontifical Council for Interreligious Dialogue.

The participants in the Mass include a delegation from Holy Land: Jordan, Palestine and  Israel, consisting of 2,124 people led by the Latin Patriarch of Jerusalem, His Beatitude Fouad Twal, in his  capacity as President of the Assembly of Catholic Ordinaries of the Holy Land, together with the  Archbishop of Acre for the Melkites Georges Bacouni, the Maronite Archbishop of Haifa and the Holy Land, Moussa el-Hage, and bishops from Jordan, Palestine, Lebanon, Iraq, Morocco, Tunisia, Egypt,  Libya and Cyprus., They will be joined in fellowship by priests, religious men and women and faithful  from various Churches.

During the Mass, the Superior General of the Rosary Sisters Congregation, Mother Anyes Al Ya'qoub will carry the relics of the new Saint Alphonsine, accompanied by Sister Braxid Sweidan and relatives of the Jerusalemite saint, Nawal Daniel Mzayyid and Patrick Daniel. The relics of St.  Mariam of Jesus Crucified Baouardy will be carried by Carmelite Sisters Anna Diplomas, Ferial Qarra' and Jocelyn Ferro, together  with the saint's relative Mr. Rizeq Baouardy. Furthermore, Emile Munir Elias and his mother will be at the Mass, knowing that he had been healed through the intercession of St. Alphonsine. An Italian  family will also hold the relics of St. Mariam as their son was healed through her intercession. Rosary Sister nun Mariam Ba'bish will also say a prayer in Arabic for peace and justice.

Upon departure for the Vatican, Patriarch Twal said, “The declaration of the sainthood of the  two nuns from Palestine is a spiritual event of prime importance for the citizens of the Holy Land,  amid the difficulties we are experiencing, as the two saints enlighten our path. As the Holy Land, wrecked by violence and dissent, has for sometimes had a tarnished image, our two saints emerge to  restore its sanctity, reminding us that sanctity is possible even in the most difficult circumstances.” The Latin Patriarch of Jerusalem said “The canonization of the two girls from the East during these dark times is an invitation from His Holiness Pope Francis to pray, knowing that only prayer can  miraculously help save our faith in the midst of these times of trial.” He added, “Now, we have two  new saints who represent a model of perfection for Christians, as well as for Muslims and Jews alike. They are both named Mary, and this name is widespread and commonly used among all three  traditions. It is a sign of our modern time which suggests that we can talk about the three religions  without any discrimination.”

Having received the joyful news last February, the Holy Land gives thanks to the Almighty God for the blessing of canonization, especially for the community of believers in the land the Lord  Jesus blessed through His presence. The Churches of the Holy Land convey heartfelt gratitude and thanks to His Holiness Pope Francis, who always states that “the Middle East without Christians, is not  the Middle East. (Apostolic Exhortation)”

We view this grand event, which takes place for the first time since the days of the Apostles, as a message of solidarity and encouragement to the Christians of the Holy Land, especially to the  Christians and parishioners in all other Middle East countries, and to those who have been forcibly displaced and deported from their home countries, to all those who suffer from persecution, and whose persecutors sometimes think that by “killing they are offering a sacrifice to God,” as Jesus himself  warned.

The new saint, Mariam of Jesus Crucified, was during her life subjected to acts of extremism and  suffered an attempt on her life in an attempt to force her to change her religion. She now intercedes for those who are being killed because of their religion and of their religious affiliation. Her life and intercession are a cry urging respect for religious and ethnic differences as well as acknowledging human beings as creatures who are made in the image and likeness of God.

The new saint Marie-Alphonsine succeeded in gaining the support of the religious authorities to set up the first local Arab religious congregation, and placing the Arab world on the map in the  fields of education and religious teaching. Furthermore, the rosary schools affiliated with this Arab religious congregation have a prominent and influential presence in Jordan, Palestine, Lebanon, the  Gulf states and Rome. We realize that during the late 19th and early 20th century this religious  congregation contributed to giving increasing the role of Arab in culture, social awareness, spiritual  guidance, and education of generations of both men and women. Illiteracy has been eliminated in many parts of the Middle East as a direct result of the active contributions of nuns and church congregations to literacy education.

The two saintly nuns, whose canonization coincides with the Church celebrations of the Year of  Consecrated Life and the blessed Marian Month of May, pray that the Lord would bring peace and  calmness to our hearts and minds, and that we will return to worshipping the Almighty God--Who  alone is worthy of our worship and thankfulness. We view the consecration of the founder of the  Rosary Sisters as an invitation to intensify the daily Rosary prayers in churches, houses, parish groups  to bring peace, love and mutual respect among all the people of the Middle East.

On the vigil of the canonization, there will be a vigil of prayer at 17h30 in the Basilica of Santa Sabina, Rome. On Monday 18th, H.B. Patriarch Twal will preside over the Mass of Thanksgiving at St Mary Major in Rome, and the Mass and songs will be in Arabic for the members of delegation coming from Holy Land.