The Vatican creates forum for African diplomats to discuss migration 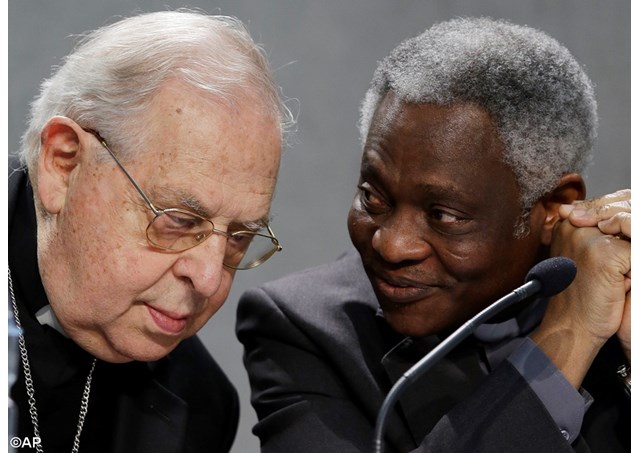 (Vatican Radio) Top diplomats to the Holy See were invited on Wednesday to share their views and express their hopes and expectations regarding the tragic situation of migrants who risk their lives to cross the Mediterranean as they flee desperation back home.

The boat-borne exodus that has seen more than 10,000 people plucked from the Mediterranean off Libya in the last month, and the deaths of at least 1,700 from drowning, has driven the European Union to draw up a plan to confront the challenge posed by the massive influx of migrants and refugees.

A joint initiative by the Pontifical Councils for “Justice and Peace” and for “Migrants and Itinerant Peoples” has created a platform for African Ambassadors to the Holy See to exchange thoughts and ideas.

The aim of the platform is also to allow the diplomats to take proposals back to their Governments, seeing – as Cardinal Peter Turkson, President of the Pontifical Council for Justice and Peace points out – that a high percentage of those crossing the Mediterranean come from African nations.

Speaking to Linda Bordoni, Cardinal Turkson pointed to what seems to be a ‘deafening silence’ coming from across the sea as tens of thousands have fled the African Continent only to encounter torture, exploitation, trafficking and even death…

Cardinal Turkson speaks of the current crisis pointing out that Pope Francis first raised the alarm when he travelled to Lampedusa and spoke of a “culture of indifference”.

He remarks on the fact that lately the dramatic turn the exodus has taken has caused the EU to hold a meeting and to draw up a plan to confront the challenge.

Turkson comments on the fact that although not everyone who is coming into Europe through the gateway provided by the Mediterranean, a good number of them are from North and Sub-Saharan Africa.

So, recognizing that the power of the Ambassadors is a limited one “we still thought we can bring them together and create at least a forum, a platform for them to exchange thoughts and at least be able to suggest to their governments that the Offices of the Holy See feel this way” he says.

Turkson says that during their meeting it emerged that in fact some governments have been making their voices heard, including Egypt. And organizations like ECOWAS and the AU have also expressed their view.

Turkson says the discussion amongst those present placed a lot of emphasis on the global dimension of the phenomenon.

He says that the problem of trafficking was also addressed as was the need for development in poor countries.

He says the Ambassadors agree that: “If that is the case why should we not charge our governments to take a serious look at this?”

Cardinal Turkson concludes pointing out that it is all very well for the EU and for the AU to meet to address the issue separately – and to come up with solutions – “but it should be possible to come together to discuss the problems together”.