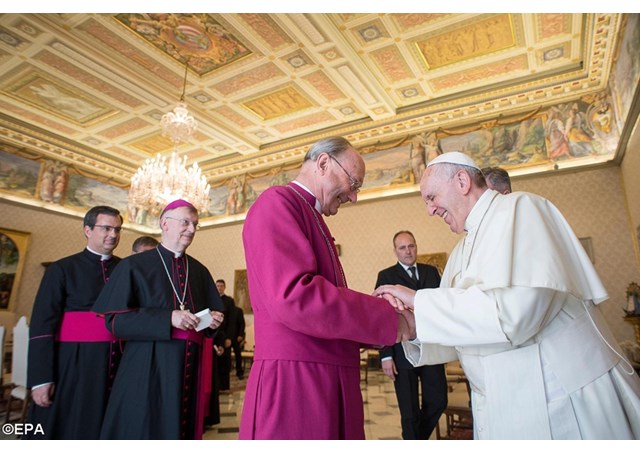 (Vatican Radio) Pope Francis met on Thursday with participants at a joint meeting of the Council of European Bishops Conferences, CCEE, and the Conference of European Churches , CEC. The CCEE brings together Catholic leaders from nearly 40 European countries, while the CEC represents over 100 Anglican, Orthodox and Protestant churches across the continent. Their joint meeting in Rome from May 6th to 9th is focused on finding a common voice to uphold religious rights and freedoms across Europe today.

In his words to the leaders of different Churches and communities, Pope Francis noted that it was in Europe where the divisions between Christians began and where, for many years, they fought bitterly against each other. Today, he said, the ecumenical movement has enabled these churches to make great strides towards reconciliation and peace, though he noted there is still a long way to go to achieve full, visible communion between all believers in Christ.

Noting how these divisions hinder the preaching of the Gospel, the Pope said this is especially evident where different churches present different visions of ethical and anthropological questions. Furthermore, he said, the Churches of Europe today are faced with new challenges such as legislation which limits religious freedoms in the name of a misguided notion of tolerance.

Finally Pope Francis reminded the group that Churches in Europe are called to stand in solidarity with the thousands of migrants fleeing poverty, persecution and conflict. Christians, he said, are called to welcome the migrants, as well as  to pray and work actively to bring dialogue and peace to those places of war and violence.