Anglican-Catholic Commission to hold next year's meeting in Canada 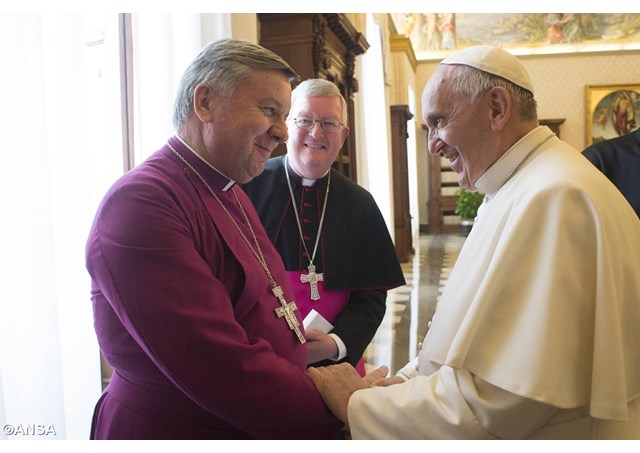 (Vatican Radio) The fifth session of the Anglican-Roman Catholic International Commission concluded this week with a decision to hold next year’s meeting near the southern Canadian city of Toronto.

The group, known as ARCIC III, met at a retreat house south of Rome from April 28th to May 4th to discuss relations between local, regional and Universal Churches and how moral or ethical decisions are made within each tradition. The Anglican and Catholic scholars have also been reviewing the substantial progress made by earlier ARCIC groups and are preparing to publish commentary on five jointly agreed statements from the previous phases of the dialogue.

During an audience with the group on Thursday, Pope Francis said these discussions remind us that ecumenism is not a secondary element in the life of the Church and that the differences which divide us must never be seen as inevitable.

Following that audience, Philippa Hitchen caught up with the two co-presidents of ARCIC III, Anglican Archbishop David Moxon from New Zealand and the Catholic Archbishop of Birmingham in the UK, Bernard Longley…

Archbishop Longley says the group has been discovering the richness of the work achieved by the earlier ARCIC groups which is now being put forward again for reception by the two communions.

Archbishop Moxon adds that many people are unaware of the progress that has been achieved in terms of agreement on core doctrines regarding authority, the Eucharist, marriage, ordination and the Church as communion. Agreement has not yet been reached, he notes, on the Gift of Authority document published in 1999 and the ‘Mary: Grace and Hope in Christ’ statement published in 2005. He adds that in his view there is broad agreement on 80% of core doctrine, while the remaining 20% presents significant challenges…

Commenting on Pope Francis’ words about the ecumenism of the martyrs, Archbishop Moxon notes that in off-the-cuff remarks the Pope spoke of the Anglican and Catholic martyrs of Uganda who were murdered together in the 1880s. The Anglican archbishop also mentions the martyrs of Papua New Guinea from different churches who were killed during the 2nd World War and where ecumenical solidarity is now extremely strong….

Finally the two leaders speak of next year’s meeting in Canada and announce that the Anglican Archbishop of Canterbury Justin Welby is expected to visit the Vatican in 2016 in the context of celebrations marking the 50th anniversary of the Anglican Centre in Rome.

Please find below the full concluding statement from the ARCIC meeting:

The Anglican-Roman Catholic International Commission (ARCIC) is the official body appointed by the Roman Catholic Church and the Anglican Communion to engage in theological dialogue in order that they may come into visible unity and full ecclesial communion. It held the fifth meeting of its current phase (ARCIC III) in an atmosphere of shared prayer and friendship at Villa Palazzola, the summer residence of the Venerable English College in Rome, 28 April–4 May 2015. Members of the Commission are grateful to the staff of Villa Palazzola for the warm welcome extended to them.

The mandate for this third phase of ARCIC is both to promote the reception of the previous work of the Commission by presenting this as a corpus and to explore “The Church as Communion, local and universal, and how in communion the local and universal Church come to discern right ethical teaching”. To this end the Commission’s work centred on examining two draft texts which had been prepared by sub-committee drafting groups since its previous meeting in Vuleka Centre, Botha’s Hill, South Africa.

The first of these draft texts considered was material to present the five agreed statements of ARCIC II so that they can be received by the respective Communions. This consists of individual introductions to each statement, whose text is included, and a brief consideration of the responses each document engendered, short essays concerning theological method and themes running through the documents, suggesting directions for future work. This work has made good progress and it is hoped that it will shortly be ready for publication.

The second text considered was a draft document responding to the ecclesiological element of the mandate, that is, an examination of the structures of our two traditions which facilitate communion within and among the local and regional and universal dimensions of the Church.

On Thursday 30 April the Commission travelled to Rome for a private audience with Pope Francis. The Pope encouraged the Commission in its work, and in the context of contemporary persecution of Christians noted, “There is a strong bond that already unites us which goes beyond all divisions.” Archbishop Bernard Longley thanked Pope Francis for the inspiration and leadership given by both him and Archbishop Justin Welby, “especially by your common commitment to seek justice for those who suffer exploitation or neglect.” Archbishop David Moxon cited the draft ARCIC II volume, and acknowledged with gratitude Pope Francis’s emphasis on the preaching of the Gospel, the simplicity of his personal lifestyle, his stress on ministry to the poor and marginalized, the positive role he has played in international reconciliation. He concluded by saying that all of these have “played their part in commending the ministry of the Bishop of Rome to Christians throughout the world”.

Later that day they celebrated the Eucharist at the Anglican Centre in Rome, which generously hosted the Commission for lunch and for two working sessions, during which it heard a paper on sensus fidei (the sense of faith) of all the baptised, and case studies on slavery. From there the group visited the Venerable English College, where presentations of the Commission’s work were made to the student body with time for questions and answers. Members then participated in Vespers and much appreciated the opportunity to join students and staff for dinner.

On Friday 1 May members welcomed Bishop Mark Santer and Cardinal Cormac Murphy-O’Connor, Co-Chairs at the last time ARCIC met at Palazzola. The special guests led an informal session in which they recounted some of the narrative of ARCIC II under their leadership. They remained until the end of the meeting.

The Commission welcomed Canon John Gibaut as the new Anglican Co-Secretary, succeeding Canon Alyson Barnett-Cowan. The Commission also extended its thanks to Fr Norman Tanner SJ, who participated as a consultant.

The next meeting will take place near Toronto in May 2016, when the Commission will take up a reworked draft of an ecclesiological statement comparing the instruments of communion of each tradition.