Catholics and Lutherans looking ahead to Reformation anniversary 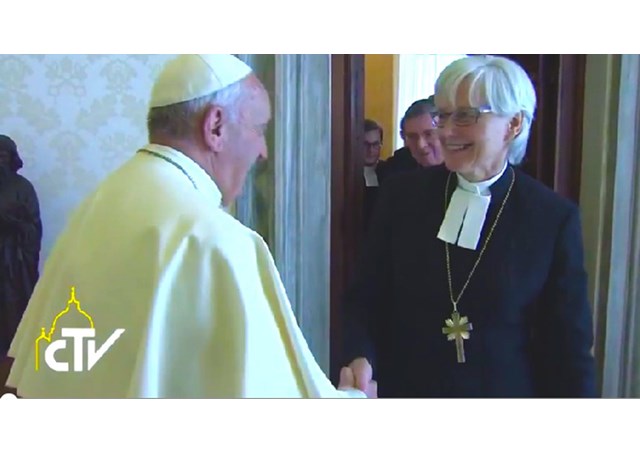 (Vatican Radio) 26 years after Pope John Paul II visited the Nordic nations, the leader of the Church of Sweden came to the Vatican this week to highlight the common commitments and shared witness of Catholics and Lutherans preparing to mark the anniversary of the Reformation together.

As Archbishop of Uppsala, Antje Jackelén is the first female head of the Church of Sweden and the first woman archbishop to be welcomed to the Vatican for an official papal audience. In her address to Pope Francis she spoke of progress made in the dialogue between Catholics and Lutherans, including the joint document ‘From Conflict to Communion’ in preparation for a shared commemoration of the 500th anniversary of the start of the Reformation.

In his words to her, the Pope said while there is still much work to do, he hoped the forthcoming commemoration may encourage Lutherans and Catholics to take further steps towards full unity of sacramental life and ecclesial ministry.

Archbishop Jackelén also talked to the Pope about the common challenges of poverty and injustice, the plight of Christians in the Middle East, the tragedies of migrant deaths in the Mediterranean and the role of religious leaders in combatting climate change. Growing in communion, she said, means learning – sometimes the hard way – about “sharing the richness of traditions rather than building fences around one’s own turf”, about “empowerment rather than about power”.

Philippa Hitchen sat down Archbishop Jackelén after the audience to take a closer look:

The Lutheran leader says it’s important to have a joint commemoration of the Reformation (which will take place in the autumn of 2016) based on the document ‘From Conflict to Communion’ which, for the first time,  gives a shared account of Reformation history. It should be possible together, she says to express thanksgiving for the Gospel, as well as repentance for the pain that our divisions have caused people….

It’s important, Archbishop Jackelén says, to focus on our shared ecumenical commitments, but the obstacle remains of families who cannot go together to the Lord’s table and that is causing grief at parish level….while Church leaders may say that people try and “hurry too much”, she believes there is a grassroots ecumenism which “is well thought through and is a genuine expression of the Gospel”….

Commenting on the questions regarding the family and human sexuality, she says it’s important to stress that we can live and talk together without denying our differences but remembering that our common mission is greater than these questions….

Speaking of Sweden as a secular country, the Lutheran leader says that secularism is, on the one hand, a story of success for the Christian Gospel because the values of human dignity and freedom are so strong they carry through all of society. Sometimes society or the world comes to the Church and challenges us with the fruit of our preaching and that’s a good thing, she says. On the other hand, she notes that the knowledge of faith has become so weak that it “is a threat to the  existential health of a whole generation”….