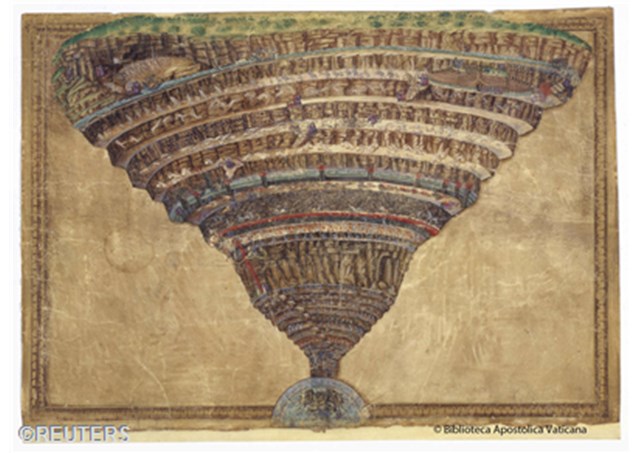 (Vatican Radio) Pope Francis has sent a message to the President of the Pontifical Council for Culture, Cardinal Gianfranco Ravasi on the occasion of a celebration held at the Italian Senate on Monday morning marking the 750th anniversary of the birth of the poet Dante Alighieri.

In the message, the Pope began by saying that he joined “the chorus of those who believe Dante Alighieri is an artist of the highest universal value, who still has much to say and to give, through his immortal works, to all those who are willing to walk the path of true knowledge”.

He said that a number of his predecessors including Blessed Paul VI , Pope Saint John Paul II and Pope Benedict XVI had referred to Dante in Papal documents.

The Holy Father added that he himself in his first encyclical Lumen Fidei, chose to tap into the immense wealth of images, symbols, values contained in Dante’s works.

On the eve of the Extraordinary Jubilee of Mercy, the Pope said it was his hope that the celebrations of the 750th anniversary of Dante’s birth, like those in preparation for the VII centenary of His death in 2021, could again make Dante’s work understood and valued.

Through his writings, Dante, concluded  Pope Francis, is a man who invites us to regain the path of our human journey and the hope to once again see the bright horizon where shines the full dignity of the human person.