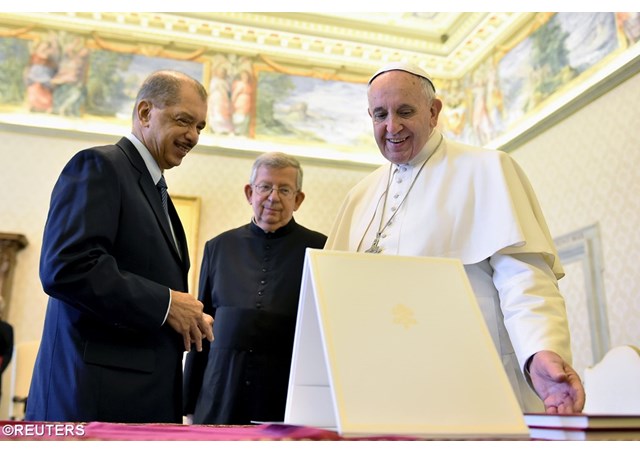 (Vatican Radio) Pope Francis on Thursday received  the President of the Republic of the Seychelles, James Alix  Michel, who subsequently met the Cardinal Secretary of State Pietro Parolin,  accompanied by Msgr. Antoine Camilleri, under-Secretary for Relations with States.

The Republic of the Seychelles is an archipelago-nation in the Indian Ocean, about 1,500 kilometres east of mainland Southeast Africa, with a population of 92,000.

A statement from the Holy See Press Office called the discussions “cordial”, and said satisfaction was expressed for the good relations existing  between the Holy See and the Republic of the Seychelles.

Mention was made of the Catholic Church’s  contribution to the service of society, especially in the fields of welfare and education, and themes of  common interest were considered, such as the dignity and full development of the human person and  the protection of the environment.

Finally, there was an exchange of opinions on the socio-political situation in the country and in the region.